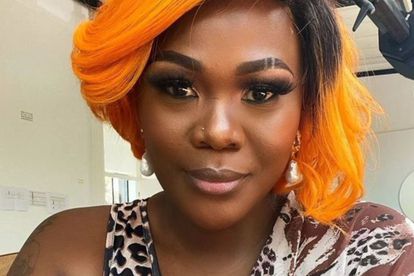 Mandisa committed suicide in Thursday morning’s (1 December) episode of The Wife a week after her on-screen husband Abdul Khoza, who played Nqoba got written out of the Showmax telenovela.

Viewers and readers of The Wife took to social media to applaud the actress for her performance as Mandisa and were not surprised by her exit as she also committed suicide in Dudu Busane’s book.

Actress Mbalenhle Mavimbela, who plays the role of Hlomu Zulu shared a behind-the-scenes video of the two of them with the caption that Zikhona taught her a variety of acting techniques.

“We dive in too hard and it’s all worth it. @zikhonasodlaka I love you and thank you for teaching me so much, you are brilliant. ”

Briefly reports that fans of the show couldn’t stop praising the two actresses’ on-screen chemistry after Mbalenhle gave Zikhona her flowers while she could still smell them.

“If you didn’t cry on today’s last episode, something is wrong with you. Stellar performance.”

“Masterpiece. Zikhona is talented for days we so hurt though gone but never forgotten ”

“Your work is fire, I must confess ‍♀️the way I cried watching this scene you andisakhalanga njee.”

“This episode was hard to watch. Well done ladies, you delivered ❤️❤️”

“Love this!❤️ They put so much effort and energy into their characters and it shows! Now, this is ACTING!”

ALSO READ:Actor Abdul Khoza explains why he left ‘The Wife’