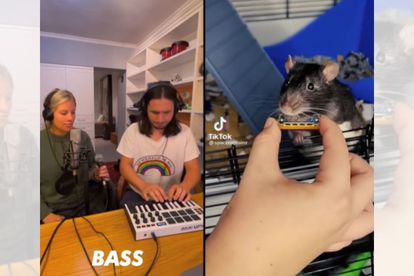 After the popular Cape Town musician, The Kiffness ventured into the relatively obscure genre of feline-focused live looping in recent times, he teamed up with his wife and a rat called Veronica for a special harmonica-focused dance track.

The Kiffness x Rats of TikTok

After the Sugarman hitmaker and his wife Jüte (his “Kiff wife”) announced that they are expecting their first child, they decided to remix what sounds like a Vengaboys melody into their new collaboration with a rat named Veronica, who originally made waves on TikTok.

“If you’re alone, and you need a rat, ooooh Veronica, won’t you play me your harmonica?” the two of them belt out. “Your melody makes me happy, won’t you be my rat tonight?”

The original video of Veronica clocked in over 700 000 views on TikTok, with most users saying that “this is their favourite video on the internet”.

Meanwhile, on Facebook, The Kiffness’ fans are loving his remixes with different animals.

“Love this, Veronica is too beautiful. Well done, you two!” Wendy Maritz commented. “Just look at the glow in her little rodent eyes. So much passion.”

Others simply love his art. “I love your art. It brings a type of joy, satisfaction, and happiness I cannot explain. Thank you.”

The Kiffness always gives South Africa a good remix and leaves us hanging onto our chairs. In his latest viral remix, he made light of President Cyril Ramaphosa misplacing his iPad.

The video was a laughable moment for many South Africans and The Kiffness used his music producing skills to bring a funky beat to the situation!