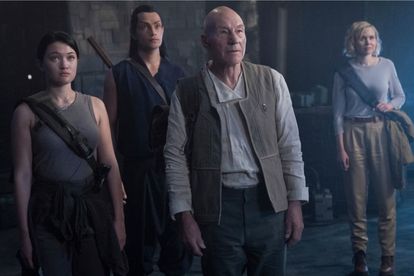 ‘Star Trek: Picard’ production has been paused due to a COVID-19 outbreak with cast and crew members. Image via Twitter @nypost

‘Star Trek: Picard’ production has been paused due to a COVID-19 outbreak with cast and crew members. Image via Twitter @nypost

Star Trek: Picard has shut down production after more than 50 cast and crew members tested positive for COVID-19.

Filming on the Paramount+ show – which features Sir Patrick Stewart in the lead role of Captain Jean-Luc Picard – had been due to resume on Monday following the festive break, but the substantial coronavirus outbreak meant it was immediately pushed back indefinitely.

According to the Hollywood Reporter, the cases impacted multiple zones on the production, including the cast, who are grouped in Zone A.

The series has one of television’s biggest crews, with more than 450 members of staff working on the programme.

The programme was renewed for a third season in September, and it is being filmed back-to-back with the second season to control costs and accommodate schedules.

Despite the sci-fi series’ popularity, Stewart previously admitted he “didn’t want to” reprise the role he originally played in Star Trek: The Next Generation from 1987 until 1994 and a number of spin-off movies.

Asked why he wanted to return he admitted:

“To be honest, I didn’t want to. I had determined long ago that my time with Jean-Luc and Star Trek was over.”

“I had given everything I could to the character in the series. But when this also came through about two years ago, I agreed with my agent that we would go and attend the meeting with [producers] Alex Kurtzman and Akiva Goldsman, and because their inquiry of me had been so polite and enthusiastic, I wanted to explain to them face-to-face why I was going to pass.”

Patrick met with the producers, who “understood” his viewpoint but went on to explain their own “vision” for the series – which sparked his interest.

“I did [attend the meeting]. They listened to me talk for half an hour or so. They said fine, they understood all that, but they had a few more things they wanted to say and they talked in a little more detail about their vision for Picard…”

“I met with them again and we talked and talked and I told them about my uncertainties and doubts and little by little I found that they were all being addressed and being addressed in such an interesting way that I was intrigued.”

“This was not going to be Star Trek: The Next Generation, Part Two. That’s why I said yes.”