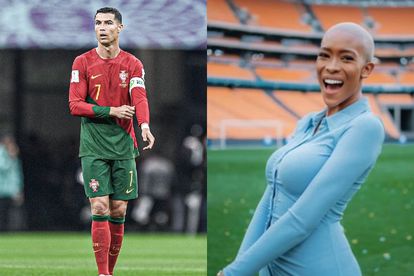 South African influencer Tshepang “Twiggy” Mollison is underfire after using an expletive to refer to Portuguese footballer Cristiano Ronaldo in a viral video.

During their “rehearsal” on SuperSport’s betting show SuperPicks, Twiggy said she would want Lionel Messi to win the 2022 Fifa World Cup currently in Qatar.

ALSO READ: Who is Mbappe’s girlfriend? Meet the first trans model on Playboy

In the short video doing the rounds on social media, Twiggy is asked who she would want to see winning the world cup, to which she replies Messi.

But it is her reason for picking Messi over Ronaldo that raised eyebrows.

“Messi, because Ronaldo is a p**s,” she is heard saying. When her colleague asks “can you even say that?,” Twiggy responds “I just did.”

Following the clip, SuperSport released a short statement on Twitter. The sports broadcasting channel claimed that the clip is from a rehearsal and was not meant for broadcast.

“SuperSport is aware of a SuperPicks video circulating on social media. This was a rehearsal that was not meant for broadcast.

“Despite this, we unreservedly apologise for the language used.”

TWEEPS FEEL THERE ARE QUALIFIED WOMEN WHO CAN ANALYSE SOCCER

“This whole World Cup has had influencer women on Supersport who don’t give a damn about soccer and it’s so infuriating because there are so many women who could actually give proper commentary,” a tweep replied.

“Twiggy called the most popular footballer in the world a p**s on national TV. You may dislike Ronaldo but there’s a better way to express negative feelings esp at work. I wana see if Supersport is going to retain her,” another tweep wrote.

While another wrote: “They hired a person who doesn’t know anything about sports! SHE KNOWS ZERO. ‘Ronaldo is a p**s’ she really thinks she’s on a twitter debate.”

Fish Hoek Beach closed to public due to sewer overflow