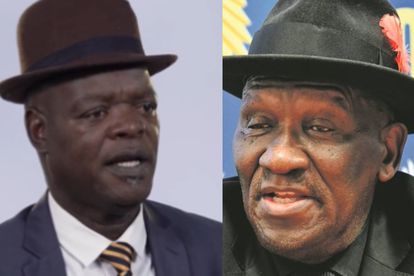 The veteran actor Seputla Sebogodi revealed in an interview with BET_Africa how South Africa’s Minister of Police Bheki Cele influenced him to play a corrupt police officer in BET’s telenovela Redemption.

Sebogodi, who is popularly known for his roles in The River and Generations revealed:

“When I read the script at first. I’m always used to playing a villain.”

He added that Cele inspired his wardrobe for his character as Captain Mthethwa on BET’s Redemption.

He also made a disclaimer that he was not implying South Africa’s Minister of Police was corrupt like his character in the drama series.

“You know in acting they say…Someone used to say you need to have a wardrobe where you go and fetch these characters, and this one I’ve got to confess, Bheki Cele. I’m not saying he is corrupt.”

The new BET drama series is set in a mega church and centres on the Zikode family. After the disappearance of Pastor Simon Zikode who is portrayed by Themba Ndaba, his daughter Faith, portrayed by Kwanele Mthethwa, leaves her music career and comes to her family’s rescue.

The publication adds that drama series is expected to be re-aired later in the year on South Africa’s free-to-air TV channel e.tv. New episodes air from Mondays to Thursdays on BET Africa channel 129.