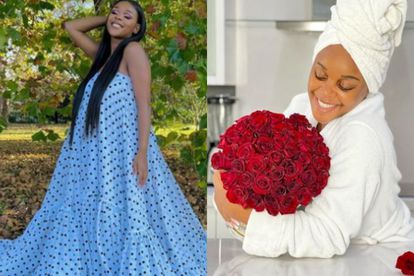 Seasoned actress Mbali Mavimbela, who is popularly known for playing Hlomu Zulu in The Wife is leaving the telenovela after two seasons. Viewers of the Showmax telenovela are guessing the actress is leaving because she fell pregnant.

Mphela confirmed Mavimbela who played Hlomu for two seasons is bowing out, while audiences predicted the actress is pregnant in real life.

Fans of the actress also predict she fell pregnant while shooting season two as she’s reportedly been hiding her stomach on her Instagram account.

Mphela also announced earlier in May that The Wife has taken a production break and season three will premiere towards the end of 2022 with Naledi, played by Gaisang K Noge as the new leading lady.

‘THE WIFE’ FANS REACT TO HER EXIT

“Hmmmm…it’ll be interesting to see how the writers go about her departure.”

“Is it because she’s expecting or what?”

“Is she pregnant? She looked pregnant Ka the last few episodes.”

“She was for the first season the third it’s Gaisang Naledi.”

“Will now focus on Naledi and her man.”

“This is sad, then who will replace her? I am really not sure if she was a great lead, unless there are various lead tactics within acting. I felt like Mandisa and Zandile outshined Hlomus’s spot. I stand to be corrected.”

“Ohh no The Wife Showmax will never be the same.”

“Family meeting iyafunekawho can the space with Showmax The Wife so they can answer this mess.”