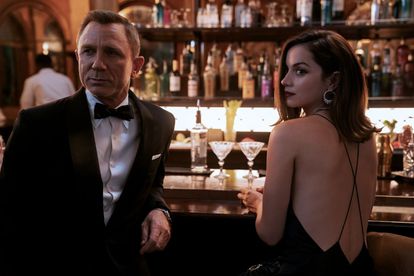 The latest instalment of the James Bond series, No Time To Die, is said to be James Bond’s best entry since Casino Royale.

After the long-awaited James Bond premiere finally made its debut after chopping and changing release dates for a year due to the ongoing pandemic, many critics got the chance to review the latest instalment which will see Daniel Craig take on the role of Bond for the last time.

So far, reviews have been stellar with many saying that “it’s better than good. It’s magnificent”.

The film, which will soon make its debut in South African cinemas, received a 90% score on RottenTomatoes, and an 8.2/10 on Metacritic. Other critics simply gave it five stars.

Owen Gleiberman of Variety says that Casino Royale, the first film in which Daniel Craig portrayed 007, was the greatest Bond film since the early Sean Connery days, and in many ways, “the most perfectly realised Bond movie ever”.

No Time to Die, at heart, is, therefore, described as a traditional Bond film, and that’s part of its pleasure.

“It is, of course, a festival of absurdity and complication, a head-spinning world of giant plot mechanisms,” he said, but concluded the film as a whole is “very enjoyable and gleefully spectacular”.

It seems the only issue some critics lifted out, is the fact the film is 163 minutes long.

Stephanie Zacharek of Time was broadly positive about the film, but suggested Craig’s swansong didn’t warrant its length.

“At two hours and 43 minutes, it’s too long and too overstuffed with plot – more isn’t always better,” she said.

“And it features one of the dullest villains in the series’ history, played by Rami Malek in mottled skin and dumb silky PJs.

“But forget all that. No Time To Die, its flaws notwithstanding, is perfectly tailored to the actor who is, to me, the best Bond of all.”

The BBC writes that No Time To Die marks the culmination of an over-arching storyline that began with Craig’s first Bond film, Casino Royale, released in 2006.

No Time To Die‘s director, Cary Joji Fukunaga, has been praised for the “satisfying, bulgingly proportioned last chapter to the Craig era, throws almost everything there is left to throw at 007 the series can come up with”.

“We’ve been expecting you, Mr Bond, for quite some time,” he added. “And what a joy and relief it is to have you back,” writes Robbie Collin of The Telegraph.

The Independent‘s Clarisse Loughrey was less enthusiastic, awarding the film three stars and describing the premise as “generic spy nonsense”.

“[Director] Cary Joji Fukunaga has made a smashing piece of action cinema with No Time To Die – it’s just a shame it had to be a Bond film,” she said. “What’s most disappointing is how strangely anti-climatic the whole thing feels.”

She added: “Despite Phoebe Waller-Bridge’s much-publicised contributions to the film’s script, No Time to Die hardly feels like the radical feminist rewrite we were promised.”

For others, the real standout is Lashana Lynch.

“The banter she has with Craig is effectively humorous and provides some of the most delightful moments in the film,” writes Next Best Picture‘s Josh Parham.

Those who simply watch the film due to its action sequences, will not be disappointed.

He also said that No Time to Die is a “big and length-wise bloated epic that includes the desired bells and whistles, which, despite its flaws, should buy the movie considerable goodwill from an audience that has waited (and waited) for it.”