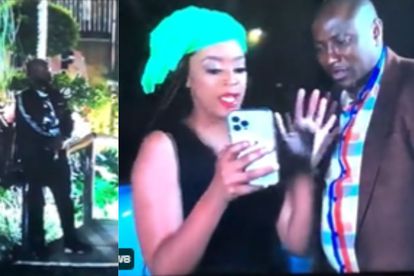 The latest wife featured on Mzansi’s popular polygamy TV show Mnakwethu trended when she became the first guest to throw TV host Musa Mseleku and his crew out of her house just as they walked in with her husband.

ALSO READ:‘I was invited to the show’: Musa Mseleku hits back at RHOD viewers

“Yebo (yes) and goodbye” is how the latest wife featured on the polygamy show Mnakwethu greeted the host – Musa Mseleku, as she walked out of her house while dishing some vulgar words on the side.

On the show, TV host and polygamist, Musa Mseleku assists married men to introduce their girlfriends to their first wife on television to ask them to agree to a second or third wife.

In the latest episode, a woman greeted Mseleku back and surprised viewers when she walked out while the show was filming.

She got a thumbs up from some viewers of the TV show who think Mseleku is supporting infidelity.

A tweep explained: “Mnakwethu is a show where men ask Mseleku to legitimise their infidelity.”

After the show, the wife also showed Mseleku disturbing receipts which proved that her husband is a serial cheater, who sleeps around, “with anything on two feet,” Mseleku’s words.

The TV host also suggested that the wife and her family should return lobola and the wife and their 2-year-old son should get the hell out of this clear toxic situation.

“Why are these people still together? It’s worse cause kunomtwana (child) in the mix.This guy should just remain single until he knows what he wants.

“Yes, finally a reaction I’ve been waiting for, damnit I’m so happy. Musa deserves this welcome, hai these ladies who keep quiet batsha (burning). Love this girl. My girl.”

“I wonder what kind of a person is the second wife coz this one yena is not the one… Umjita must go back to the drawing board.”