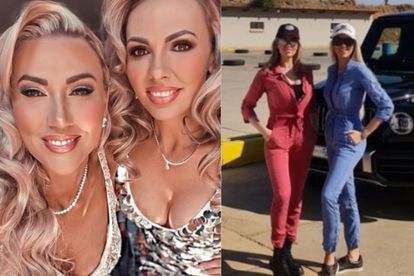 On the last episode of The Real Housewives of Pretoria (RHOPTA), Mel Viljoen hosted a “diamond nail day” with the housewives. Kiki was one of the ladies who got diamonds installed in her nails.

However, Mel seemingly threw shade at Kiki towards the end of the episode for becoming more friendly with the other housewives.

“I believe Kiki is experiencing internal conflict because the women are beginning to embrace her as a friend. She mentioned Renske’s cars were a bit dirty and had things to say about that. And now she appears to want to be their friend,” said Mel on RHOPTA.

Twitter users thought it was likely that the cracks in Mel and Kiki’s friendship would start to show. Take a look…

“Ooo are Mel and Kiki about to beef,” wrote @Sizepea.

“I’m not surprised that there seems to be some tension brewing between Mel and Kiki,” wrote @splashkitten_.

“Also, why is Mel mad that Kiki is getting along with other girls? 🤣🤣🤣,” wrote @Being_Claudia.

“Mel is nobody’s friend she just proved that by throwing Kiki under the bus, saying that she gossiped about Renske. There’s no friendship there. Their little alliance is going to the sh!ts. 😂,” wrote @RelebogileDiph1.