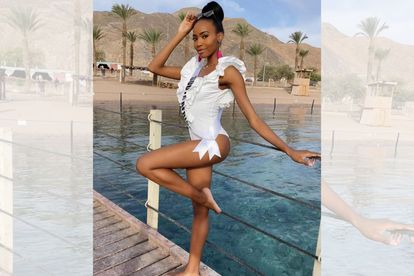 Lalela Mswane may have angered the majority of South Africans by embarking on her trip to Israel for the Miss Universe pageant, but appears she is having the time of her life.

The Miss SA winner has been documenting her travels in the country ahead of Sunday’s finale at the Universe Arena in Eilat.

WINING AND DINING IN CARMEI AVDAT

Lalela and the rest of the Miss Universe squad visited Carmei Advat a popular winery located in the heart of the highlands of the Negev Desert in southern Israel.

Lalela visited Coral Beach in Eilat, which is known for having over 100 types of stony coral and 650 species of fish.

The beauty queen chanelled another famous queen; Sheba, who in biblical times visited King Solomon in Israel to hand-deliver a gift.

SNEAKING IN A HISTORY LESSON

Lalela managed a squeeze in a history lesson at the Israel Museum. According to it’s IG bio, it is ranked among the world’s leading art and archaeology museums.

The local official thanked Lalela for “speaking truth to power and not just being a beautiful but a very brave lady”.

Fleur was no doubt referring to to Miss SA’s stance of visiting Israel, despite the backlash of South Africans and human rights organisations.

PRETTY AT THE POOLSIDE

There’s always time for a selfie at the pool, claims the lovely Lalela.

TRAVELLING BACK IN TIME

Lalela Mswane posed up a storm in Jerusalem as she visited the famous Old City.