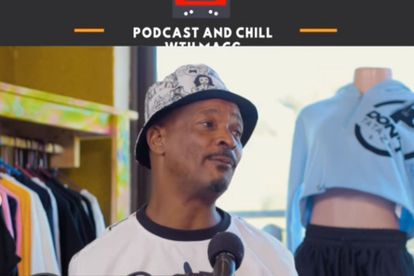 ‘I was born in Moria’: Mapaputsi leaves tweeps and MacG in stitches [WATCH]. Image via Instagram @macgunleashed

‘I was born in Moria’: Mapaputsi leaves tweeps and MacG in stitches [WATCH]. Image via Instagram @macgunleashed

Legendary kwaito artist – Sandile Ngwenya – who is popularly known as Mapaputsi recently left tweeps and podcaster – MacG in stitches in the recent Podcast and Chill episode.

Veteran kwaito artist – Mapaputsi was the latest star to be interviewed by Macg in yesterday’s (21 April) Podcast and Chills episode.

While some tweeps said the kwaito legend left them confused, majority revealed he was a great storyteller, from revealing he was born at ZCC headquarters – Moria to discussing his music career, his hit song Izinja, his friendships with Brenda Fassie, Arthur Mafokate and many more.

Tweeps were also fascinated with the fact that the star seemed to not to be interested in answering some questions and that he led the entire conversation.

Some Chillers even suggested that MacG’s co-podcaster- Sol Phenduka should’ve interviewed him instead, as MacG couldn’t grasp his Kasi lingo.

“The Mapaputsi interview was not for children from the burbs. Too much tsotsi lingo and you can’t trust MacG with such. He was giggling – lost throughout.”

The star revealed in his interview with TshisaLIVE that he’s hoping to release an album later this year and that he wants to assist artists to get into the industry.

“I want to help know the truth about the entertainment industry and for them to know their rights within the space so they don’t get exploited.”

“Music is a stepping stone.”

“They will start there and pursue other things because music opens doors,” he said ahead of the Strictly Kwaito Legends Festival.

He also explained that his hit song Izinja wasn’t just about dogs in his 2020 interview with arts24.com:

“What people don’t understand about that song is that it’s not just about dogs barking, but it’s also about freedom.”

“It’s about when we got the right to vote and were able to express ourselves, and that there was nothing that could hold us back.”

“The dogs were out and anybody who wanted to hold us back would regret that.”

TWEEPS REACT TO THE LATEST ‘PODCAST AND CHILL’ EPISODE

“Dankie, no subtitles! Podcast and Chill you were the MVP making sense of everything, collecting the facts, and highlighting the important bits.”

“Shout out to MacG for keeping up and remembering the question.”