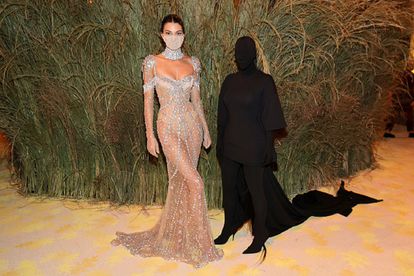 ERAGE) (L-R) Kendall Jenner and Kim Kardashian attend the The 2021 Met Gala Celebrating In America: A Lexicon Of Fashion at Metropolitan Museum of Art on September 13, 2021 in New York City. Image: Jamie McCarthy/MG21/Getty Images for The Met Museum/Vogue .

ERAGE) (L-R) Kendall Jenner and Kim Kardashian attend the The 2021 Met Gala Celebrating In America: A Lexicon Of Fashion at Metropolitan Museum of Art on September 13, 2021 in New York City. Image: Jamie McCarthy/MG21/Getty Images for The Met Museum/Vogue .

Photos taken of Kim Kardashian and Kendall Jenner together on the Met Gala‘s red carpet are inspiring the best memes of 2021 so far.

Kim arrived at New York’s Metropolitan Museum wearing a black bodysuit that completely covered her face, arms, legs, and heels for the “In America: A Lexicon of Fashion” exhibit, while Kendall chose a beautiful gown inspired by Old Hollywood for the special occasion.

The gown was reportedly designed by Balenciaga designer Demna Gvasalia. It’s said that after entering the gala with Gvasalia on her arm, Kim kept the entire crowd guessing as to who it was under the ensemble. It was only when her sister Kendall was close by when onlookers got the final hint.

What’s more, earlier this week, Kim was photographed wearing a mask that zipped shut across her face and eyes while she was out in New York City. Kim hasn’t shared the inspiration behind her recent face coverings, but she did post about the leather outfit on Instagram with a knife emoji as her caption.

Meanwhile, TMZ reports that Kanye West encouraged Kim to do the look. Multiple sources said, “he gave Kim the courage to push the envelope with creativity and people’s imagination through art,” TMZ wrote.

The outfit is said to be a switch-up from Kim’s looks in the past, which leaned heavily on embellished gowns with revealing silhouettes. The complete antithesis of what we’ve come to expect from Kim, this full-coverage getup is proof that her style is constantly evolving, both on and off the red carpet.

Of course, the internet responded with various memes and Twitter posts. From guessing it is a dementor from a Harry Potter film or the Grim Reaper, most believe that Kim’s ensemble has “American Horror story” vibes.