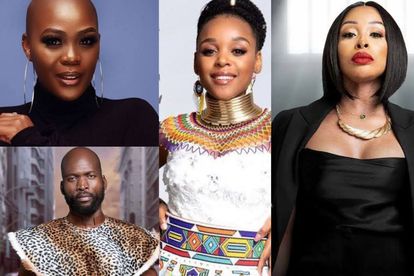 Viewers of The Wife are devastated that leading actors Khanyi Mbau, Zikhona Sodlaka, Mbali Mavimbela, and Mondli Makhoba, who played the characters of Zandile, Mandisa, Hlomu, and Nkosana Zulu respectively have exited the Showmax telenovela.

Fans of the show believe seasoned actress Mbali Mavimbela, who played Hlomu Zulu is pregnant as Mphela revealed that she will be replaced and her role is still relevant in the upcoming season unlike the roles of Mbau, Sodlaka, and Makhoba.

Readers of the book series were not surprised by the departures of Mbau and Makhoba as their characters, who are husband and wife in the show travel a lot in season three. In contrast, others predict Makhoba is shooting Ishaka Illembe.

Audiences also expected Sodlaka to not be part of season three as her character commits suicide in season three of the book series.

“It’s evident now that there’s some disagreement between the actors and production. How sad, the show will definitely lose viewers.”

“Phil, etswa Ka taba please. Dintshang Daar? Why are the people not returning? With Mbali, I had concluded it may be because she is with a child. But now this?”

“That’s the saddest part in all this was really looking forward to their beautiful love story, perfectly backed up by their tight Zulu family. Now it just seems like it will be a mess.”

“Seems like the whole cast is leaving. This is telling that something is seriously wrong behind the scenes.”