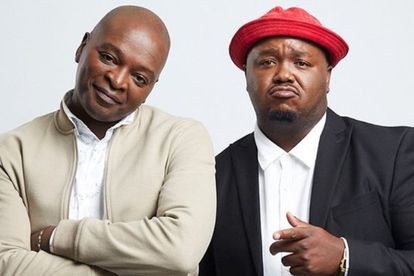 ‘For the last time’: Thomas and Skhumba bid farewell to Kaya 959 [VIDEO]. Image via Twitter @Kayaon959

‘For the last time’: Thomas and Skhumba bid farewell to Kaya 959 [VIDEO]. Image via Twitter @Kayaon959

This is after the station reportedly fired them for being off-target and replaced them with seasoned broadcasters Dineo Ranaka and Sol Phenduka.

The station announced Msengana and Hlophe their replacements and have reportedly been replaced as part of their brand repositioning strategy to grow listenership and advertising revenue.

Sources from the Johannesburg-based station told Sunday World that Hlophe and Msengana were removed from the show because the ratings have dropped drastically and the show has struggled to attract advertising.

The source added Msengana, who was working on the daytime show before teaming up with Hlophe for the breakfast show, was just collateral damage.

“Skhumba was supposed to be the only one gone as he is not radio material.”

“Mornings will never be the same without you. I’ve followed you since your early days on 180 till now. #TheShowGoesOn and all the best with your new venture! This is it fam.”

“Siyabonga for the great memories. Will you please rap for us before the end of the show?”

“My morning routine just changed instantly, now I need to find a new way to get myself ready for the day & still have fun doing that mina I’m hurt by your departure from the morning slot.”

“This is a big mistake, anyway I’ll listen for the last time today…..senghembe, hello @Radio2000_ZA.”