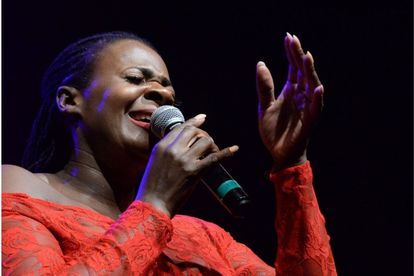 Amapiano is tantalising everybody’s taste buds these days and it seems like jazz legend Judith Sephuma also wants in! The Mme Motswadi singer was with amapiano producer Tyler ICU and the two are working on a big number!

Sephuma, Tyler ICU, rapper Reason and two other people were all in the video when Tyler ICU played Sephuma’s track on Instagram live yesterday. Judith Sephuma’s voice certainly stood out on the soulful amapiano single and everyone in the room couldn’t get enough of the track.

The jazz musician was excited and danced along to her vocals on the soulful single. “That is me Judith!”, she says in the video.

In the caption of the Instagram video, Tyler ICU wrote, “Welcome Mrs Judith Sephuma to amapiano.”

The pair have not announced any release dates for the collaboration.

OTHER ARTISTS HOPPING ONTO AMAPIANO

Heavyweight rapper Reason jumped onto the amapiano wave and collaborated with DJ Maphorisa on his single Khanda Shisa. The song was released on 23 July. Reason released the song under an alias, Sizwe Alakine.

Entrepreneur and rapper Boity teased an amapiano song she is working on with producer Felo Le Tee. When asked if she was really hoping onto the amapiano wave she tweeted, “Yes. Why Not?!”

Tweeps commended Boity for the song and everyone is excited about it.

AMAPIANO TO THE WORLD

Rapper Cassper Nyovest is also out of the country and is taking amapiano to the world with a touch of rap of course! The rapper is in Ghana and will be touring the United Kingdom and Dubai.

Other amapiano stars who will be travelling to the United Kingdom are Focalistic, DBN Gogo and Maphorisa.