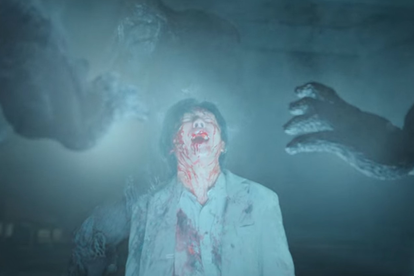 People have not stopped raving about Netflix’s Squid Game ever since its release in October. The gory series quickly became the streamer’s most viewed show as people across the world marveled at the storyline and graphic murders. And now it seems there’s a new contender for the number one spot as Netflix’s Hellbound pulls some serious numbers.

‘Hellbound’ gives ‘Squid Game’ a run for its money

Netflix’s latest South Korean horror story Hellbound is raking in some serious numbers and it has only been on our screens for about a week.

The show follows a group of demons who hunt down sinners and send them to hell and was directed by Train to Busan‘s Yeon Sang-ho.

What makes this even more terrifying is that the sinners are told the date and time of their death before the demons – which take the shape of scary giant hairy monsters – hunt them down.

The show reportedly became Netflix’s most-streamed show on 20 November and remained the most streamed show by the 22 of November.

LadBible reports that Hellbound surpassed Squid Game in more than 80 countries within just 24 hours of its release.

ALSO READ: Why is Squid Game so popular? Five reasons you might not know

Even though Squid Game is seemingly losing its ranking has Netflix’s big hit, there will be a season two. Director Hwang Dong-hyuk confirmed the news after seeing how many were calling for some more Squid action.

“So, there’s been so much pressure, so much demand, and so much love for a second season. So I almost feel like you leave us no choice.

“But, I will say there will indeed be a second season. It’s in my head right now. I’m in the planning process currently. But I do think it’s too early to say when and how that’s going to happen,” said Hwang.