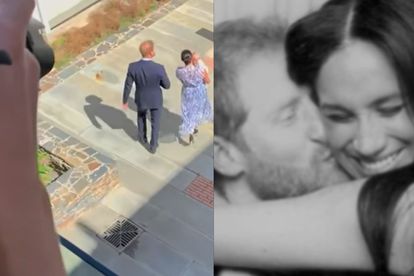 Following the release of the trailer for Harry & Meghan on Monday 5 December, royal experts have weighed in on the Duke and Duchess of Sussex suggesting press intrusion using a photo from an approved photo op in South Africa.

The Daily Mail reports that royal experts are rounding on Prince Harry and Meghan Markle following the release of the trailer for their docuseries on Monday 5 December.

The publication reports that a photo used in the trailer suggesting intrusion from the press was actually from an approved photo opportunity in South Africa (SA). The trailer includes a photo of a photographer snapping a picture of Prince Harry and Meghan from a balcony which was taken by an “accredited pool” – at Archbishop Desmond Tutu’s residence in SA.

This comes after an image from the first teaser was reportedly a stock image of photographers at the Harry Potter and the Deathly Hallows: Part Two premiere in London in 2011. This was five years before the pair met in 2016.

Royal correspondent Robert Jobson tweeted that the photograph was taken by an accredited pool in Cape Town.

“This photograph used by @Netflix and Harry and Meghan to suggest intrusion by the press is a complete travesty. It was taken from a accredited pool at Archbishop Tutu’s residence in Cape Town. Only 3 people were in the accredited position. H & M agreed the position. I was there,” tweeted Jobson.

Jobson went on to say that he was there and allowed inside, where there was no press intrusion.

“This shot by me @theroyaleditor  from the same accredited pool position on my iPhone was taken at Archbishop Tutu’s Cape Town residence. There was no intrusion. I was part of a 3 person UK palace pool. Nobody else was allowed in and we shared the words and photos with the UK Media,” he tweeted.

How to watch Orlando Pirates match LIVE on TV

Ex-miners who contracted TB before 2019 urged to lodge claims