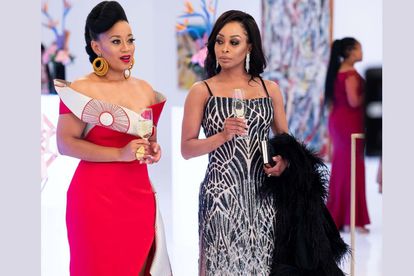 Netflix dropped the official trailer and release date for the Happiness Ever After starring actress Khanyi Mbau today (22 October).

‘HAPPINESS EVER AFTER’ RELEASE DATE

Fan favourites Khanyi Mbau, Renate Stuurman and Richard Lukunku will reprise their roles in the sequel. However, Mmbatho Montsho who played Nandi in the first film, will not be returning for the sequel. Instead, Nambita Ben-Mazwi will be one of the lead characters.

The South African film, which is “going global” just like Khanyi, will be released on 10 November on the streaming platform.

“Old flames. New faves. #HappinessEverAfter brings together Khanyi Mbau, Renate Stuurman and Nambitha Ben-Mazwi for this tale of sisterhood, love and self-discovery. Releases 10 November, only on Netflix,” read the description from Africa on Netflix’s YouTube channel.

“This sequel to “Happiness is a Four-Letter Word” finds Zaza, Princess and Zim living new chapters of their lives amid loss, family grudges and new love,” the description continued.

WHAT TO EXPECT FROM THE FILM

Happiness Ever After is a romantic drama which follows the lifestyles of a Johannesburg-based girlfriend crew. The ladies tackle the issues of relationships, parenting, family and more. While the first film was based on the novel of the same title by Nozizwe Cynthia Jele, Happiness Ever After is independent of the book.

The sequel is based on the same characters from the book but will see the growth of the characters developed by the screenwriter Ayanda Halimana.

“The sequel lives independently from the book but obviously with some of the old characters returning to bring  more drama and more sizzle  in the sequel,” said Khanyi in a statement.

The sequel is set five years after the first film.