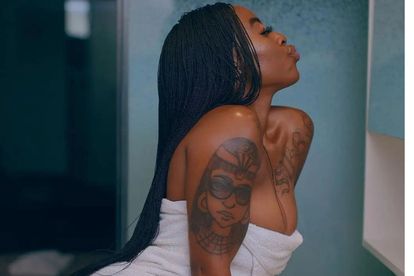 Former Big Brother Mzansi housemate Terry Treasure has revealed that she’s excited to be returning to OnlyFans so she can make the R2 million outside of the #BBMzansi house.

The content creator was one of the three housemates to exit the reality TV show last Sunday (27 March).

#BBMzansi fan-favourite housemate – Terry Treasure is making her way back to OnlyFans to make the R2 million prize that’s being given away this next Sunday (3 April) on Big Brother Mzansi.

She revealed in an interview with Drum Magazine that she’s taking a break from music and wants to get back into making adult content on OnlyFans.

“I am putting the music on hold for now. I need to think about what direction I want to take and build the aesthetic first and grow my brand before I go back.”

“I am definitely going back to OnlyFans. I missed it so much. In the house, I was dying to have my phone to create some content.”

The reality TV show is drawing closer to an end and only five housemates – Gash1, Mphowabadimo, Tulz, Libo, and Themba left.

Gugu “Terry Treasure” Bonga (26) revealed in her Big Brother Mzansi exit interview that she almost lost her sanity in the house.

“I think I’ve lost my sanity, but I’m back. It’s psychological warfare, it’s all about mental strength more than anything.”

She also told Lawrence Maleka who’s the host of the show:

“My highlight was the first day. That set the tone for me, knowing that so many strong personalities were in the house.”

“That tested my true personality.”

ALSO READ:#BBMzansi Prediction: Neither Libo nor Tulz will win the R2 million

She also told the publication that she’s happy to go back to her “normal life” away from the pressure of the competition.

“I actually don’t feel horrible at all. I am glad I lasted this long, and I am in a great and positive spirit.”

“This week was Wafa Wafa, and there was no need to be strategic. I was content with whatever decision because I have come this far.”

Terry also hopes Mpho will walk away with the R2 million prize money.

“Mphowabadimo is holding it down for the ladies and she has such a great support system, and I would love for her to win.”

“She has stood up for possible eviction every week but made it through.”

She also shared that Libo was her least favourite housemate.

“I won’t lie, Libo is my least favourite. I think every move he has made hasn’t been genuine.”