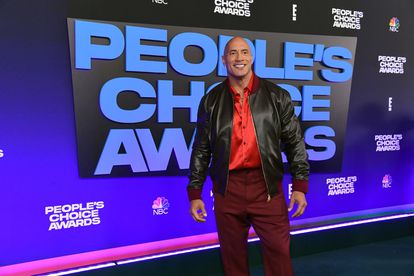 The 49-year-old wrestler-turned-actor had already been chosen as the recipient of the People’s Champion Award, in recognition of his contribution to the entertainment industry and entrepreneurial endeavours, as well as the former WWE star’s commitment to supporting children and families in need through various charitable initiatives.

And being the ‘People’s Champion’ that he is, the Red Notice star insisted the “original people’s champion” was the late boxing icon Muhammad Ali, and Make-A-Wish recipient Shushana, who he handed the title over to.

“She said, ‘He told me to tell you you are the people’s champion, you have earned it, you take that title.'”

“The last time I saw Muhammed, we were at a Make-A-Wish event and we were both granting wishes. His last words to me were, ‘You keep rumbling.'”

DWAYNE JOHNSON AND THE MAKE-A-WISH RECIPIENT

The movie star then surprised People’s Choice’s Make-A-Wish recipient Shushana by bringing her out on stage at the Barker Hangar in Santa Monica, California.

“Being here tonight with us and with you guys, this is her wish. She has no idea what I’m doing. This is a total surprise. I met her earlier. I told her how proud I was of her story,” said Johnson.

“She is a fighter, she has inspired her family and friends. I want to tell you just how much you’ve inspired me and everyone around you and certainly everyone here. I want to give you this because you represent everything that it means to be a People’s Champion — so this is for you.”

“First, thank you for this. I didn’t expect this at all. But, I mean, thank you to Make-A-Wish in general. I just never expected that something this good could happen. This is crazy. I never thought that it could end up in this, survive something,” said Shushana.

For his starring role as Frank Wolff / Francisco Lopez de Heredia in the Disney flick Jungle Cruise, Johnson was also crowned The Male Movie Star and The Comedy Movie Star of 2021. And he dedicated the latter accolade to his co-star Emily Blunt.

OTHER WINNERS AT THE AWARDS

Scarlett Johansson was another top winner in the movie categories, with Black Widow – in which she stars as the titular MCU spy – being named The Movie of 2021, while the 37-year-old star was also crowned The Female Movie Star of 2021.

Prior to the ceremony, it was revealed that Halle Berry would be crowned the People’s Icon, Christina Aguilera was named People’s Music Icon and Kim Kardashian Wast scooped the Fashion Icon prize.

Grey’s Anatomy was named best Drama Show of 2021, while the show’s star Ellen Pompeo nabbed The Female TV Star of 2021.

BTS were the reigning music winners. After landing four awards last year, the K-Pop septet were named The Group of 2021 for the second year in a row, while mega-hit Butter won The Song of 2021, and The Music Video of 2021 prizes.