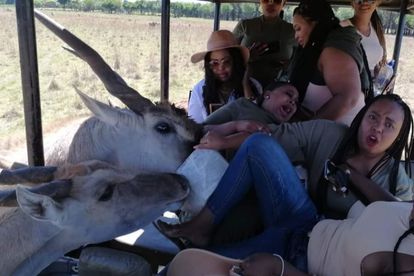 In another “how it started vs how it ended” social media post, two buck can be seen hilariously interrupting a group of safari-goers while they were clearly trying to enjoy their game drive.

How it began vs How it ended on safari

According to Jacaranda FM, a group of ladies got more than they bargained for on a game drive when two buck decided to investigate the inside of the bakkie and got up close and personal with them.

The “how it ended” post shows some of the ladies scrambling to get away from the buck. It is not clear where the video was taken, or when, but social media users cannot get enough:

“The longer I look at, the funnier it gets,” said @brownsugarbear_ on Twitter. “It was at this moment that sis was ready to go home and get ready for work,” said @__Gatzby.

Only in South Africa?

If you find that funny, a South African driver went viral last week for using a part of a supermarket trolley instead of a spare wheel to get around, and numerous comments suggested that something of that calibre “only happens in South Africa”.

Believe it or not…a video of a VW Golf went viral on Twitter after it was seen cruising around with a supermarket trolley instead of a spare wheel.

A passenger in the car driving behind the Golf captured the video and can be heard laughing in encouragement as the reckless driver of the Golf speeds ahead with only three roadworthy wheels.

One of the missing back wheels had been replaced with four trolley wheels. “Wow this is so cool, my broer!” the person can be heard saying.

The registration plate, CEY, suggests the vehicle could be from the Strand and Gordon’s Bay areas of Cape Town.