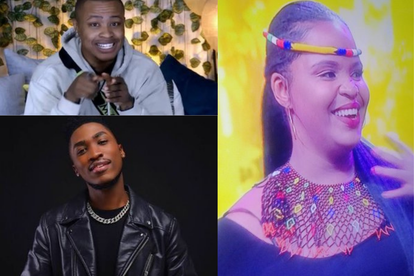 #BBMzansi: Yoli, Vyno and Norman got evicted from the house. Images via Twitter @Jabu_Mcdonald and @AngelZwane

#BBMzansi: Yoli, Vyno and Norman got evicted from the house. Images via Twitter @Jabu_Mcdonald and @AngelZwane

Yoli, Norman and Vynno received the least number of votes from the public and were sent home.

ALSO READ:‘I was not into BU. It’s part of the game’: Acacia on her #BBMzansi exit

Yoli, Norman and Vyno were the sixth, seventh and eighth housemates to be evicted this week after Zino, B.U, Acacia, Mvelo and Dinky Bliss in previous weeks.

30- year-old Durban-based arts teacher – Yolanda Glover who is also known as Yoli describes herself as an outgoing and bubbly person according to dstv.com.

The housemates referred to Yoli as their Mamma Bear because she had no beef with anyone and was always ready to listen.

She’s also a good judge of character, which makes her an interesting conversationalist.

Bongani Sikhukhula aka Vyno  Miller is a 25-year-old musician from Pretoria. He describes himself as a bit of a nerd who’s sometimes wild and sometimes chilled.

He dated housemate Terry in the house and also flirted with housemates Yoli and Venus.

He stated in his interview that his strategy for winning the competition is to keep introducing new twists by being the guy that’s always smiling and laughing, but causing a bit of chaos behind closed doors.

Norman Nhlapo is a 24-year-old Daycare worker who describes himself as a family man and is especially close to his mother and siblings.

He loves easily and confesses he’s a hopeless romantic according to dstv.com. He revealed in his interview that his strategy was to show compassion, love, and authenticity in the big brother’s house.

ALSO READ: #BBMzansi 2022: Acacia is the third housemate to be evicted

“She was busy playing Mum’s role in the house. Comforting, advises, encourages people. And forgot to play the game.”

“Worse Gash1 hit her down. Gash saw that she has a strong character that he target her and he won. Exactly what he did to BU.”

“Terry will pick Vyno over him when the time comes.”

“He just pulled the trigger first to betray them before they can betray you.”

“Snakey Tamara hugging Vyno so tightly that time he took him off the competition.”