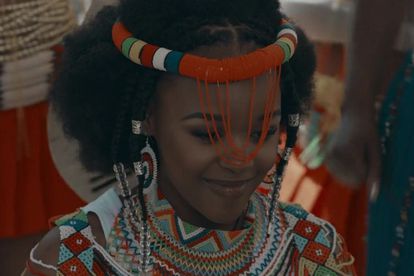 Mbali Mavimbela as Hlomu in ‘The Wife’. Image via Twitter @JongaList

Mbali Mavimbela as Hlomu in ‘The Wife’. Image via Twitter @JongaList

Former Skeem Saam actress Mbalenhle Mavimbela, who joined The Wife as Hlomu Zulu in season one says she will miss playing the character when the show ends this season.

ALSO READ:Mbali Mavimbela had to get therapy for ‘The Wife’ role as Hlomu

The businesswoman and actress Mbalenhle Mavimbela tells True Love Magazine that playing Hlomu Zulu in The Wife has been a spiritual journey.

“I think I need to elaborate on why and what I mean by that. Hlomu has been through a lot, there are weird things that are happening to Hlomu that are now starting to happen to Mbali that I need to obviously not allow, especially the bad stuff, but all the great things I welcome with warm hands.”

When Mavimbela is asked what she will miss about the show she reveals that she’ll miss her character.

“I will definitely miss Hlomu. She was my escape, I’ll miss Hlomu because I lived with her for so long so I think I’ll definitely miss her. And obviously, work and the crew and the cast and people I’ve met and made friends with but mainly just being Hlomu – I’m going to miss that.”

THE ACTRESS OUTSIDE ‘THE WIFE’

True Love reports that the actress Mbalenhle Mavimbela now sees herself as more than an actor since joining the Showmax telenovela The Wife.

“She’s now a business. Since joining the show, she’s launched a wine brand called Moments and has a production company, Mmbela Productions.”

“I’m talkative, I’m open, I’m free to tell people stuff but then I’ve also mastered that art of just keeping quiet because sometimes you will respond and … you’ll find yourself in trouble. I won’t mention names but people in the industry that have kept their lives not private but have been quiet when it comes to things like that so that’s what I’m also practicing for myself.”

‘Sit down’: Tweeps slam Talana after calling out Mel Viljoen