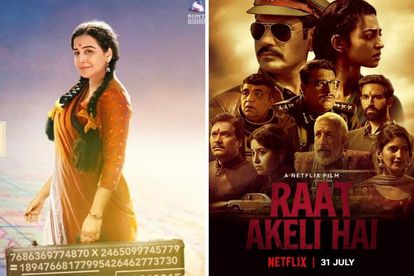 Whether you are looking for a Bollywood biopic or a thriller, here are reviews of two releases which are worth streaming on television this weekend.

Promoted as a biopic, the film tells the story of Guinness World Record-winning “human computer”, the late Shakuntala Devi.

Vidya Balan plays Devi, and the film looks at her life from the perspective of her daughter Anu (Sanya Malhotra).

Shakuntala Devi pays tribute to her genius as a mathematician. The film also humanises Devi as a woman and a mother, as it aims to capture her indomitable spirit.

It’s clear that there were a few fictional additions to the screenplay for cinematic purposes.

Female screenplay writers Ishita Moitra and Nayanika Mahtani give a clear message of equality and female empowerment. They portray this expertly with a tight script and effortless back-and-forth narration.

There is a slightly rushed climax but the solid screenplay leaves no room for boredom.

In addition, the entertainment factor remains high as Shakuntala works her maths magic on stage.

Balan’s performance is one of the best you will see this year as she does justice to the character in every sense of the word.

Malhotra is phenomenal as Anu, too, her performance is solid and expressions top-notch. She had the chance to work with the real life daughter, Anupama Banerjee.

Amit Sadh also makes a good impact: He truly is versatile and a joy to watch.

Sachin-Jigar’s music score is simple and has a lovely feel as the tracks appear in the film.

Last week we had a look at Dil Bechara which marked the directorial debut of casting director Mukesh Chhabra.

This week, another casting director, Honey Trahan, directs his first film Raat Akeli Hai. However, that may be the only similarity between these two films with Raat Akeli Hai a whodunnit.

Raat Akeli Hai tells the story of the murder of the aged family head, centring on the wealthy Kanpur family and its dark secrets.

The film zooms in on the investigation as Inspector Jatil Yadav (Nawazuddin Siddiqui) eerily questions the suspects. There are flashbacks from a related family case five years ago occasionally popping up.

Siddiqui’s performance is the film’s highlight, with Radhika Apte and Nishant Dahiya also standing out as key suspects in the investigation.
The focused nature of the film means proceedings are straightforward and the writing easy to follow.

Despite this, it is commendable how suspense still looms and the storyline maintains its grip, particularly in the post-interval portions.

However, the soundtrack and score are not memorable enough.

There is an enjoyable romantic angle and unique undertones such as the celebratory wedding gunshots.

All in all, as a whodunit this one scores massively for its plot twist and edge-of-the-seat second half.

Despite slow opening sequences, it is neatly constructed and the simplicity of the film works. The acting is also top-notch with Nawazuddin and Radhika leading from the front in every sense of the word.