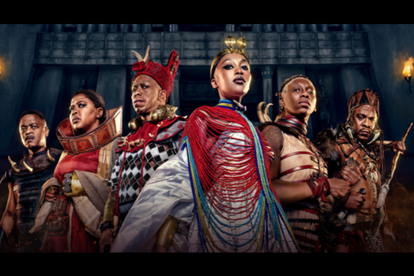 The first two episodes of Blood Psalms, the first Showmax Original fantasy series, premiered on the streaming platform on 28 September.

Set in ancient Africa, the action-packed epic follows Princess Zazi (Bokang Phelane) as she battles a world-ending prophecy to navigate her people through ancient curses, long-standing tribal vendettas and the wrath of the gods.

Q&A WITH THE FILMMAKERS

The fantasy series is the brainchild of Jahmil XT Qubeka and Layla Swart.

Where did the idea for Blood Psalms come from?

Qubeka: I was just always extremely curious about our continent. The question mark around the history of Africa, and where we come from, has been a great platform for us to be able to build this world.

Swart: I think Blood Psalms is a yearning more than anything else. It’s a look at a history that has never been depicted before, that we always wanted to see.

When is Blood Psalms set?

Qubeka: 11 000 years ago. Blood Psalms is an action adventure series that invites us into a world that no longer exists, a time before the Great Flood changed the world.

Swart: Blood Psalms draws from elements of a multitude of African mythologies and looks at various different tribes in Season 1 – the Akachi, the Uchawi, the Ku’ua, the Chini, and Great Nziwemabwe – as they migrated south from Kemet, which is now Egypt, and formed their cultures.

Qubeka: These tribes moved southward, running away from the calamity that was happening in Kemet and Kush, which is what we now know as northern Sudan. There are remnants even today that show that there was a great civilization and a great culture that comes from that space.

How do you feel about the inevitable Game of Thrones comparisons?

Swart: It’s a pioneering show that attempts to redefine our very perception of our identity as Africans. What we’re trying to do is to reclaim the continent’s history from an African perspective. The goal, for us, is to ensure that the golden thread of Africa’s stunning history really shines.

Qubeka: If we don’t start to project an image of how we see ourselves, someone else is going to do that for us.

Why should audiences watch your show?

Qubeka: It’s a sweeping epic adventure that doesn’t hold back. It is definitely a large canvas, one that I personally have not seen from this continent. This thing is big.