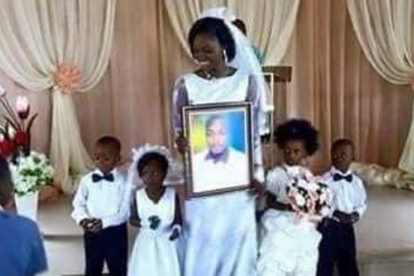 While the world is continuously evolving and more and more women are deciding not to get married, there are still so many women who absolutely love the idea of saying I do to the love of their lives. One bizarre bride took this yearning for marriage to the next level after deciding that she wasn’t going to wait for the man of her dreams to meet her in person before she married him.

A bizarre bride does the unthinkable

We all know at least one woman who has always wanted to get married. And while many women are no longer into saying I do and settling down, some still hold on to the dream of walking down the aisle and hearing those wedding bells ring.

One woman wanted to get married so much that she went through with her dream wedding despite her groom’s absence. In snaps shared online, the blushing bride can be seen standing by a photo of her groom to who she decided to say “I do”.

The bizarre wedding photos were shared with a Facebook group called Igbo Rant HQ by a woman called Vivian Chizoba.

According to Vivian, the woman and her man met online and instantly sparked a romantic long-distance relationship. Not long thereafter, they were discussing a wedding even though he was not able to make it to her soon.

He then sent he some money for the ceremony and a picture of himself which she then said yes to at their wedding and judging by the photos, never let go of throughout the day.

Meanwhile the internet shares their concerns and of course jokes

While some said that it was utter madness, others understood why the young bride did it. A lot of them wondered why they didn’t just do a video call wedding. Read some of their comments about the extreme wedding day below:

“They could have done a video wedding”

“He has a family abroad”