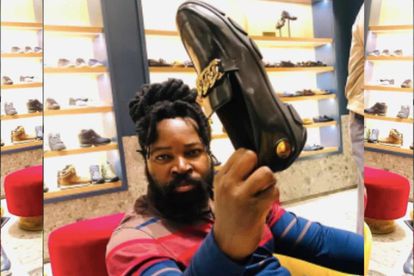 The multi-talented Inkabi (as he often refers to himself) is securing the bag by grabbing every opportunity. The Ama-million hit-maker announced that he is the new brand ambassador for Carvela shoes.

Big Zulu posted a picture of himself signing the Spitz deal on a table of Carvela shoes on 31 July.

This is not the first deal Big Zulu has signed as he is also the brand ambassador for Bentwood pants. Bentwood is a well-known brand in the amapantsula community.

His latest deal complements his sense of style which is the taxi driver, or “inkabi”, look which he uses to rattle stereotypes associated with the word.

He  thanked all his friends, “Nkabis and Nkabikazis” (fans) for the love they showed and went live on Instagram to talk more about the partnership.

He discussed how the international fashion brand has designed and made a shoe especially for him.

For more Big Zulu style inspiration, check him out on Instagram.

His Inkabi look and acting skills are not the only things which make him popular with the  ladies on social media.

In the last few months, Big Zulu impressed fans when he made his acting debut on SABC1’s award-winning and loved soapie Uzalo.

Other celebrities also branching out

Celebrities are increasingly looking at alternative ways to earn an income.

There is Emtee for example, who has his own branded sneaker range.