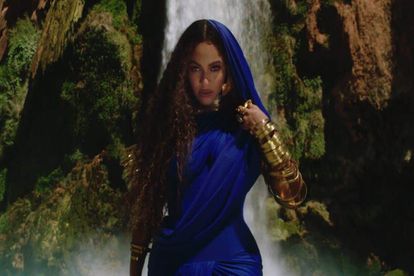 2020 was a non-stop year for Beyonce. Image via Twitter @Beyonce

2020 was a non-stop year for Beyonce. Image via Twitter @Beyonce

Queen Bey shared the four-minute video of her 2020 highlights on her IGTV channel on 1 January.

The clip included previously unseen footage of children, Blue Ivy and twins Rumi and Sir; snippets from her Disney film Black Is King, her collaboration with Megan Thee Stallion on Savage Remix and more.

The video was captioned “cheers to a New Year Beyhive!” and reflected heavily on how the coronavirus pandemic affected the globe in 2020.

“2020 divided us and united us. Most could not see loved ones and we felt too many losses, but we were united by our humanity,” Beyoncé said in the post.

She said for her 2020 was about celebrating joy, chasing happiness and living in love. She said she prayed for new beginnings and for the Beyhive to honour themselves and those they love.

“Celebrate that you are an important individual who contributes to our beautiful collective,” she said.

One of fans’ favourite highlights from the video was unseen footage of the Carter kids. Beyoncé is seen driving a golf cart with three-year-old twins Rumi and Sir on either side of her. Rumi is singing along to Megan Thee Stallion’s Savage remix featuring Beyoncé.

Queen Bey asks her: “How do you feel about your summer this year?. Did you have a good summer? “What did you do?”

The twins were also seen modelling alongside Beyoncé for her Ivy Park x Adidas collection.

A clip of Hair Love narrated by Blue Ivy is also show, along with a clip of her performing the vocals to Brown Skin Girl. There are also headlines of Blue Ivy becoming one of the youngest Grammy nominees in history.

The video also featured a clip from Megan Thee Stallion’s Instagram where she said the one artist she wanted to make a song with was Beyoncé, followed by their Savage remix.

Queen Bey mentors singing duo Chloe x Halle and included them in the video. The speech she gave when presenting the girls with the Billboard Rising Star award played while headlines of the girls’ success crowded the screen.

OTHER HIGHLIGHTS FROM BEYONCE’S 2020

Other featured highlights of Beyonce’s 2020 included the 77th Golden Globe Awards, Roc Nation Grammy brunch and BeyGood COVID testing where Beyoncé teamed up with her mom Tina Knowles to support the #IDidMyPart campaign with mobile testing in their hometown of Houston, Texas.

She had showreels of some of her speeches from 2020, including the Global Citizens speech that paid tribute to doctors and healthcare workers during the pandemic, and her “class of 2020” commencement speech.

Here is her acceptance speech for the BET Humanitarian award, where she also spoke about the importance of voting:

The showreel included her Ivy Park x Adidas Drip Two collection, headlines of her leading the Grammy nominees and her British Vogue cover for December 2020.