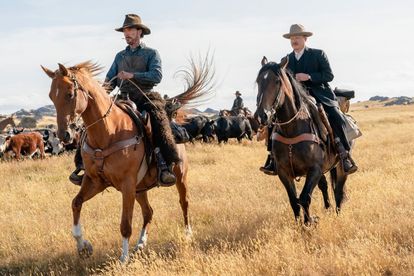 ‘The Power of the Dog’ leads the Oscar nominations with 12 nods. Image via Twitter @TPOTD

‘The Power of the Dog’ leads the Oscar nominations with 12 nods. Image via Twitter @TPOTD

A few straight actors have played LGBTQI+ roles in films and on television shows, one being Benedict Cumberbatch. The successful actor played an LGBTQI+ character in a new Netflix film, The Power of the Dog and shared that there was thought put into the character.

‘THE POWER OF THE DOG’

Directed by Jane Campion, The Power of the Dog is a film that follows a charismatic rancher, Phil Burbank (Benedict Cumberbatch) who hopes to find love someday.

His brother George (Jesse Plemons) and his wife Rose (Kirsten Dunst) live on the ranch with Phil. Phil torments them until he finds the love he is searching for.

Benedict Cumberbatch’s character Phil Burbank is a gay man who ends up in a relationship with Peter Gordon (played by Kodi Smit-McPhee).

Cumberbatch is a straight actor, but this is his second time playing an LGBTQI+ character in a movie. His first was in 2014 when he played Alan Turning in The Imitation Game.

‘It wasn’t done without thought’

Cumberbatch mentioned that he is quite sensitive about representation, diversity and inclusion.

“One of the appeals of the job was the idea that in this world, with this specific character, there was a lot that was private, hidden from view.”

“It wasn’t done without thought. I also feel slightly like, is this a thing where our dance card has to be public? Do we have to explain all our private moments in our sexual history? I don’ think so,” said Cumberbatch.

According to Variety, The Power of the Dog received a four-minute standing ovation at the Venice Film Festival on Thursday 2 September.

The film could potentially land Benedict Cumberbatch an Oscar nomination for his performance. The movie itself could also be up for a major Oscar.

Watch the trailer of ‘The Power of the Dog’ here