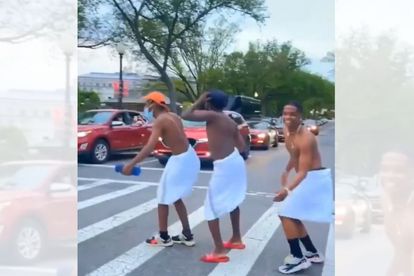 A video of three men in towels dancing to Amapiano while crossing a street in Washington, in the United States went viral earlier in this week.

The footage shows the men jive to Woza by Mr JazziQ, Kabza de Small and Lady Du, feat Boohle. The video made an impression in South Africa particularly seeing as Amapiano is a style of house music that emerged in South Africa in 2012. It is said to be a hybrid of deep house, jazz and lounge music characterized by synths, airy pads and wide and percussive basslines.

According to TimesLive, the three men in towels are later joined by several people dressed real fancy and trying to keep up with the moves. The initial tweet that went viral has been watched over 300 000 times and has over 20 000 likes as of 28 April.

Dancing to Amapiano in the US

After the video went viral, many are wondering why exactly this performance took place.

“Am I the only one who has a lot of questions, Why are they wearing towels? Where are they going? From where? And then the other group of people seem like they from a wedding but….,” a Twitter user wrote.

Others suggest that a performance like this will not easily take place in South Africa on account of regular road rage incidents that takes place over the country.

After Master KG’s Jerusalema hit went viral all over the world in 2020, many are wondering if this is the new dance hit that is set to go viral in 2021. The Jerusalema challenge was one of many things to shed a positive light on 2020. Since Master KG and Nomcebo Zikode’s hit was released, various people from all over the world proceeded in taking part of the dance challenge – which is a ‘proudly South African’ product as stated by the president.