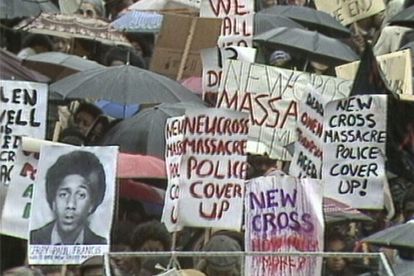 The BBC documentary collection Resistance in a Hostile Environment, from Oscar-winning filmmaker Sir Steve McQueen (12 Years A Slave), is now streaming on Showmax.

The omnibus includes Uprising, which won the 2022 BAFTA Award for Best Factual Series, and Black Power: A British Story of Resistance, which was nominated for a 2022 BAFTA for Specialist Factual. Both have 100% critics’ ratings on Rotten Tomatoes.

The documentaries examine the systemic racial injustice that shaped what it meant to be Black in Britain from the late 1960s to the early 80s, and trace the real-life stories of resistance that inspired McQueen’s five-film anthology series Small Axe, which won BAFTA and Critics’ Choice awards among many, many others.

As IndieWire puts it, “Small Axe grew out of a desire to shed light on Black resistance movements in Britain… So, too, [do the] documentaries… which chronicle pivotal stories from recent British history largely ignored by media. Viewed collectively, the films make it clear that McQueen almost single-handedly aims to disrupt the preferred timeline with films that detail tumultuous crusades for change that cross borders, and still very much resonate today.”

In addition to producing the omnibus as a whole, McQueen and BAFTA nominee James Rogan (Stephen: The Murder that Changed a Nation, Putin: A Russian Spy Story) co-directed Uprising, which examines three intertwined events of 1981 that would go on to define race relations in the UK for a generation: the New Cross Fire, which killed 13 young Black people; the Black People’s Day of Action; and the Brixton riots.

Guardian called the three-part miniseries “brilliant and furious and human,” while the Rotten Tomatoes critics’ consensus says, “Honest, harrowing, and heartbreaking, Uprising is an incredible feat of documentary storytelling from Steve McQueen.”

BAFTA nominee George Amponsah (Enslaved) directs Black Power: A British Story of Resistance, narrated by Oscar winner Daniel Kaluuya (Judas and the Black Messiah). The feature documentary looks at the ‘60s and ‘70s through the eyes of the young Black people who refused to take racism as a part of the natural order of things in the UK, examining the socio-cultural movement that helped fuel hope and resilience, mobilised in protest of the apartheid system in South Africa, and ultimately started Britain on the road to being a more inclusive and diverse society.

Black Power draws on interviews with activists like Linton Kwesi Johnson, as well as archive footage of civil rights leaders, from Altheia Jones-LeCointe, Darcus Howe and Roy Sawh to Malcolm X and Martin Luther King Jr., to trace the rise of organisations such as the British Black Panthers, R.A.A.S. and The Fasimbas.

“Does anybody remember learning about these prominent figures and crucial events in British Black history in school?” asks Black Girl Nerds, saying, “It’s maddening that this entire movement has been overlooked for decades.”

Black Power: A British Story of Resistance, they say, “is truly a history lesson we need. Many of these important people have been forgotten or are completely unknown, but this documentary honours their legacies by shining a light on them. You’ll be surprised at just how much we didn’t know.”

The final documentary, Subnormal: A British Scandal, directed by newcomer Lyttanya Shannon, examines one of the biggest scandals in the history of British education (and the inspiration for Education, the final film in the Small Axe anthology): the unofficial but widely accepted segregation policy of the 60s and 70s, which saw hundreds of Black children in Britain labelled as “educationally subnormal” and wrongly sent to schools for pupils deemed to have low intelligence, until Black parents, teachers and activists banded together to expose the injustice and force the education system to change.

The Guardian says Subnormal “is a chronicle of systemic racism… that ruined people’s lives. The activists, academics and psychologists here all talk with a sense of steady fury about what was allowed to happen… This is a sobering story, told with skill and compassion, and it is a compelling and devastating account.”

As McQueen told IndieWire, “These stories are now out in the world, so no one can claim ignorance anymore. A generation decided it would no longer condone how British society defined it, and fought back. That was very important for me, that they are tightly interwoven into the fabric of British history.”