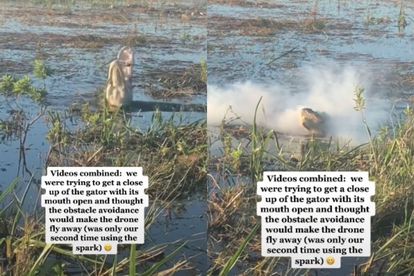 There are certainly a few things you should never let near an alligator… One of those includes a top-of-the-range drone. This TikTok user got her drone chomped up by an alligator after trying to get a closer look at what he might be up to in the lake.

TikTok user @devhlanger describes herself as a travel adventurer and skydiver. While exploring the Everglades in Florida, she thought it might be a good idea to get a closer look at an alligator with her drone.

Unfortunately for her, her drone became the alligator’s afternoon snack!

In the clip, one can see that the alligator completely decimated the drone with smoke billowing out of its mouth. Dev mentioned that it was her only second time using her drone.

“We were trying to get a close up of the gator with its mouth open and thought the obstacle avoidance would make the drone fly away (was only our second time using the spark).”

Dev and her team of adventurers were certainly shocked at the alligator enjoying the drone. “Don’t eat that! George no!”

Needless to say for Dev, her day went from adventurous, to expensive and sad with just one quick chomp!

The National Park Service website has strict rules on drones in their national parks.

The rule about drones reads: “Drones and other unmanned aircraft are not allowed in the park, or any other National Park Services site. This includes model airplanes, quadcopters, etc.”

A drone might’ve been the best shot on getting a closer look at the gator but this attempt was unfortunately unsuccessful!

A few lessons can be learned here.. Don’t take your new drone out to get a closer look at an alligator, otherwise your drone could literally go up in smoke!