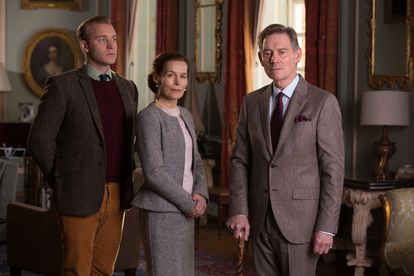 Watch The Syndicate on BritBox this January

In 2021, TV fans received the best of British programming when the subscription video-on-demand service BritBox launched in South Africa.

BritBox is not just home to thousands of hours of classic and contemporary British content – new and exclusive series are launched every month. The latest includes The Syndicate – a drama series centred around the stately home of Hazelwood Manor.

Catching up with Hazelwood Manor

Overlooking the seaside town of Scarborough, the once impressive manor has been in the family of Lord Hazelwood (Anthony Andrews from Brideshead Revisited) since his ancestors built it in the 18th century.

There used to be more than thirty staff at the house, but now, with mounting debt, there are just five remaining since Lord and (the second) Lady Hazelwood (Krige) were forced to let the others go.

Gardener and math enthusiast Godfrey (Lenny Henry from Othello, Harry Potter and the Prisoner of Azkaban), housekeeper Sarah (Cara Theobold from Downton Abbey), cleaner Dawn (Elizabeth Berrington from Mr. Turner), cook Julie (Melanie Hill from Stardust) and gamekeeper-cum-groomsman Sean (Richard Rankin from The Crimson Field) all have to pitch in and do more than one job just to keep the household running smoothly.

Now, Lord Hazelwood’s health is failing and the second Lady Hazelwood and her son Spencer (Sam Phillips from In The Flesh) – who have grown a little too accustomed to their lives of grandeur – are more concerned with maintaining their lifestyle than sorting out the estate’s disastrous finances.  With the future of Hazelwood in question and their jobs on the line, the unthinkable happens when the staff wins the lottery…

Krige – who was born in Upington in South Africa – says “Lady H” and her son continue to spend money they don’t have in the new season, presumably borrowed from the bank because they have a very large overdraft. However, Krige gets the feeling that Lady Hazelwood doesn’t spend that much money herself, but she cannot say no to her son:

“She doesn’t wear expensive clothes and doesn’t appear to go and have a facelift or anything, but I think her great weakness is her son; she can’t say no to Spencer.”

And so, after Lord Hazelwood’s health deteriorates, Spencer is already handling the family accounts. In this instance, “Lady H” and Spencer misuse that authority…but that’s not the only issue:

“‘Lady H’ is genuinely lonely in this marriage,” Krige continues to explain. “And she has not been accepted by the staff from the very beginning. The marriage gets lonelier and lonelier and sadder and sadder, and if it had not started off on the wrong foot who knows it might actually have worked.”

This is also fuelled by the fact that the staff wins the lottery – a very surprising moment for all:

“The lottery win comes out of the left field and it’s appalling, just not what’s meant to happen. Everything unravels and the fact that they’ve been involved in something criminal comes to light.”

As for the story as a whole, Krige says that The Syndicate is wonderful:

“It kept me guessing, episode by episode, one astonishing twist after another, but the glorious thing of course is that it’s all character-driven, so you’re constantly discovering more about the people you meet. It’s rather like a relationship because it’s full of the unexpected but gets more and more intense. You get inside everyone’s head and it’s such a clever idea.”

Both Season 3 and 4 of The Syndicate are available to stream on BritBox from 13 January 2022.

Lotto jackpot winner: Ever wondered what a R32 million cheque looks like? – PICTURE

Mother and daughter busted for drugs worth more than R1 million