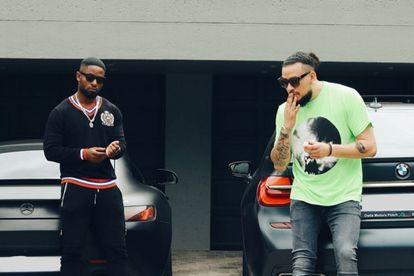 Prince Kaybee and AKA are #BestieGoals. Image via Instagram @princekaybee_sa

Prince Kaybee and AKA are #BestieGoals. Image via Instagram @princekaybee_sa

Following the tragic death of his fiancée Nelli Tembe on 11 April, AKA stepped away from the limelight and handed over his social media accounts to his management to administer while he was grieving Thembe’s death.

“As we undergo this painful journey, I have entrusted my team to handle all of my affairs in the public domain including all my social media platforms,” said AKA in a statement released at the time.

Yesterday, Supa Mega stepped on stage for the first time since Tembe’s death to perform at the opening of the Nebank Cup Final at the Free State Stadium in Bloemfontein alongside Prince Kaybee.

AKA back on stage

A few days ago, television host Anele Mdoda also announced that AKA will be joining other big names in the industry for the Huawei Joburg Day event on 28 May.

And then on Friday, his “bestie” — the under-fire DJ Prince Kaybee — took to Twitter to announce that he will be opening the Nedbank Cup Final alongside his “maat” AKA and Kamo Mphela.

“The Boy is opening the Nedbank Cup Final alongside Kamo and My Maat,” wrote Prince Kaybee on Twitter.

AKA fans expressed their excitement and support as they took to the comments section of the post to show Supa Mega some love.

Prince Kaybee also showed AKA some love. A fan commended the love Prince Kaybee has for AKA and he responded with a video of the two playing a friendly game together.

According to a response from Prince Kaybee in the comments section, the video was taken just last week.

This follows a tough public relations week for Prince Kaybee as his side chick, named “Eurica”, went public with private messages and DJ Hazel Mahazard leaked his nudes on her Twitter account.

After initially denying his infidelity, Prince Kaybee confessed to cheating on his radio presenter girlfriend Zola Mhlongo over a period of five years.