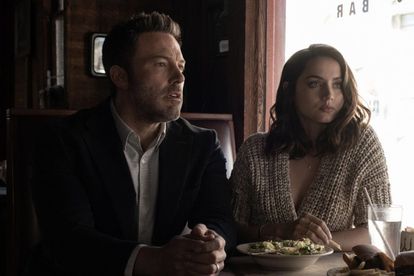 ALSO READ: The Film and Publications Board investigates ‘The Wife’ sex scene

The British director, 81, practically defined the genre in the 1980s and 1990s with films like 9 1/2 Weeks and Indecent Proposal – and above all Fatal Attraction which gave the world the term “bunny-boiler”.

Now Lyne is back after a 20-year break with another steamy tale of marital infidelity, Deep Water, starring Ben Affleck and Ana De Armas.

The pair briefly dated in real life, though hopefully with less grisly consequences than in the film, in which Armas’s character drives her husband crazy with flagrant affairs.

“When I cast them, I did a test in my house in LA,” Lyne told AFP in an interview over Zoom.

“I didn’t know a lot about Ana… but when I saw her work with Ben I could see straightaway that the chemistry was good. It’s not about her or him, but them together.”

ADRIAN LYNE SAYS TRUST IS EVERYTHING BETWEEN A DIRECTOR AND ACTORS

One thing that has changed since Lyne was last behind the camera is the presence of intimacy coordinators, who try to make sex scenes more comfortable for the actors.

“I was sort of appalled by the notion of it,” admitted Lyne.

The toughest battle, however, was keeping the unsettling tone of the movie:

“Often, studios’ instinct is to iron out the bumps in a screenplay, but those are often the most interesting parts,” Lyne said.

“I wanted to do a movie where there’s a sort of complicity between them. This is not a happy, conventional marriage. There’s a sense of unease.”

At a time when Hollywood is seen as increasingly puritanical, was it hard for Lyne to get so sexual a story into production?

“People always want to isolate sex and talk about sex in movies, but it’s part of everything we do,” he said.

Lyne has been married for almost 50 years, so should his wife be worried about his preoccupation with this theme (his last film was “Unfaithful” with Richard Gere)?

“She’s sat right next to me so I have to be careful,” he said with a laugh.

“I don’t know why I do them endlessly. It sounds corny, but I like films where you can put yourselves in the shoes of the actor. I can appreciate Dune or The Matrix or whatever, but I much prefer smaller pictures about you and me.”

Nor is there any particular reason why Lyne has been away for two decades – it is just the reality of movie-making, where projects can take years to finance and sometimes collapse at the last minute.

He is determined not to wait as long for the next one.