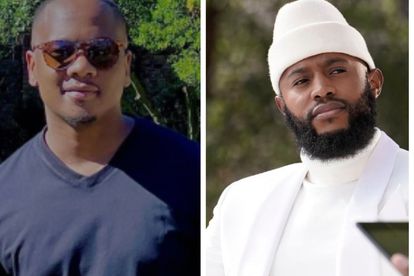 Actor and businessman Mohale Motaung is finally telling his side of the story in a tell-all interview that will be on Showmax, however, tweeps are not excited about the host, Aldrin Sampear.

In 2020, Aldrin took to twitter to admit to abusing two of his exes. In light of this revelation, tweeps are not happy with the radio and TV broadcaster interviewing Mohale about abuse.

ALSO READ: Finally! Mohale Motaung’s ‘side of the story’ in tell-all special [watch]

‘MOHALE: ON THE RECORD’ PREMIERS IN AUGUST

Mohale: On the Record is a show where Mohale, who is Somizi Mhlongo’s estranged husband, will be setting the record straight about their relationship and the abuse allegations he levelled against the Idols SA judge.

In August 2021, he alleged during an off-the-record interview that was later leaked, that Somizi physically abused him during their marriage. An article by Sunday World at the time reported that Mohale Motaung claimed that just three weeks into their relationship, Somizi had threatened him with a knife.

While Somizi is already sharing his side of the story in season five of Living the Dream With Somizi, little has been said about how the alleged abuse, the leak and the pending divorce has impacted Mohale.

“I initially had no intentions to publicly speak of the events that have occurred, due to an agreement I had with the other parties involved. But when the agreement was dishonoured by the other party, it became paramount that I tell my truth as I know it,” Mohale has said.

Mohale: On the Record is set to premiere on Thursday 4 August.

FANS DO NOT WANT ALDRIN AS THE HOST

It is no secret that Mohale’s show is one that fans have been eagerly anticipating, as they would like to hear what he has to say. But, tweeps have expressed that it makes no sense for Aldrin to interview Mohale.

The Power FM anchor has previously admitted in a Twitter thread (which he later deleted) that he physically abused two of his exes — one during his teens and another at a later stage.

News24 reported about his confession in 2020, in which he spoke about the abuse that his mother endured when he was younger. In his thread he spoke about how his mother would “provoke” his step-father, further revealing that he had also physically abused two of his former partners.