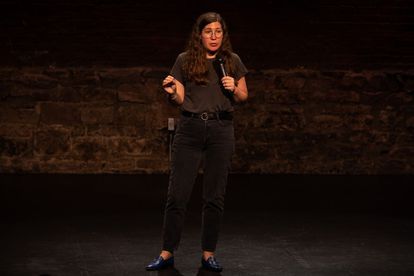 Comedian Alison Leiby stands on stage during her show ‘Oh God, A Show About Abortion’ at Cherry Lane Theatre in New York City on 2 June 2022. America is bitterly divided over abortion. But on stage in New York, the comedian tries to lift taboos surrounding the right by making people laugh at her own experience of ending a pregnancy. Image: Yuki Iwamura / AFP

Comedian Alison Leiby stands on stage during her show ‘Oh God, A Show About Abortion’ at Cherry Lane Theatre in New York City on 2 June 2022. America is bitterly divided over abortion. But on stage in New York, the comedian tries to lift taboos surrounding the right by making people laugh at her own experience of ending a pregnancy. Image: Yuki Iwamura / AFP

America is bitterly divided over abortion. But on stage in New York, comedian Alison Leiby tries to lift taboos surrounding the right by making people laugh at her own experience of ending a pregnancy.

In Oh God, A Show About Abortion, the 38-year-old takes up the challenge of making light of a subject that can be very delicate and difficult for many.

TRYING TO DESTIGMATISE HOW AFRAID MANY ARE OF ABORTION

With a large dose of self-mockery, Leiby portrays herself as a New York anti-heroine, who has no dreams of motherhood and considers herself incapable of managing her finances and fails to keep her cactus alive.

But above all, Leiby downplays the medical procedure and its aftermath, recounting a banal Saturday in New York that did not leave her feeling discomfort or guilt.

“I thought that I just had not seen a lot of depictions or stories in pop culture or in a documentary or in interviews. I never hear people talk about the kind of abortion I had,” Leiby told AFP, describing her experience as “not traumatic.”

“This kind of abortion is incredibly common, at least in places where abortion is accessible. So I thought that maybe it would be worth telling that story to kind of destigmatise how afraid many are.”

Leiby says she is after laughs but also wants the show to be “an easy way to start talking about a difficult thing for people.”

She admits that she is aware of her privilege as a white, heterosexual woman who lives in a state where abortion is legal.

The hour-long show, which has been running since April, was given impetus on the evening of 2 May when a leaked draft decision showed that the Supreme Court was planning to overturn Roe vs Wade, ending 50 years of nationwide access to abortion.

“It certainly made the show just take on more meaning for me performing it every day, and it feels more political,” said Leiby.

THE SHOW ADDRESSES THE STIGMA AROUND ABORTION

Last week, one performance ended with a Q&A with Nancy Northup, president of the Center for Reproductive Rights, an advocacy group that campaigns for abortion rights.

“This show is terrific because it addresses stigma around abortion,” Northup told AFP.

“I think that she brought humanity and a real sense of urgency… (that) we need to be talking about abortion more,” she added.

Leiby also tackles in raw and uninhibited way contraception, being a woman who does not want to have kids, and periods, calculating quickly on stage that they can take up 2 000 days or six years of a woman’s life.

Many themes spoke directly to members of the audience, which were overwhelmingly women.

“I’m someone that doesn’t want to have kids of my own,” said Briana Gio, a social worker who grew up in Oklahoma, a state that recently signed America’s most restrictive abortion ban.

“(But) we go through this phase. All of a sudden we have this moment of, am I getting too old? And then also just the fact that people are like, ‘You’re gonna regret it.’ I hear that a lot from my mother,” the 30-year-old added.

TAKING THE ABORTION SHOW AWAY FROM ITS LIBERAL AUDIENCES

Leiby would like to take her show away from New York and its liberal audiences. But she is wary.

“(But) the people who do want it (Roe v. Wade) overturned are very, very active and present and involved in that belief in a way that can feel very scary.”

For now, her show’s run in Manhattan has been extended to 30 June.

Kunene to appeal guilty judgement for calling Malema a cockroach