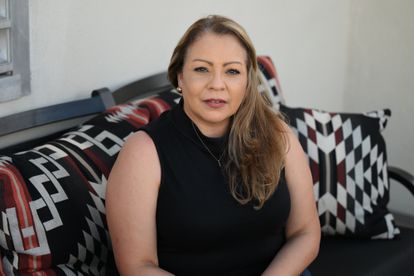 Diana Villanueva, 53, who is against abortion, discusses her work running “Rachel’s Vineyard,” a retreat inspired by Christian biblical scripture which offers support to women who, like her, regret their abortion, in El Paso, Texas, on 16 June, 2022. – When she was 16, Diana Villanueva became pregnant after being raped, and then the man forced her to have an abortion. When she remembers the day that haunted her for decades, this devout Catholic remembers how difficult it was to act against her will. Photo: Robyn Beck / AFP

Diana Villanueva, 53, who is against abortion, discusses her work running “Rachel’s Vineyard,” a retreat inspired by Christian biblical scripture which offers support to women who, like her, regret their abortion, in El Paso, Texas, on 16 June, 2022. – When she was 16, Diana Villanueva became pregnant after being raped, and then the man forced her to have an abortion. When she remembers the day that haunted her for decades, this devout Catholic remembers how difficult it was to act against her will. Photo: Robyn Beck / AFP

Diana Villanueva’s rapist took her to an abortion clinic when she was just 16 years old and told her to terminate her pregnancy.

She wasn’t greeted by the crowds of protestors who often gather outside facilities in the United States to try to persuade women to change their minds.

But now, this 53-year-old Catholic wishes she had been — because she has been haunted by the termination ever since.

“But then at the same time, I wish somebody would have been there, because maybe that would have given me the courage to speak out and say: ‘I don’t want to do this’.”

Villanueva now runs a retreat in her native El Paso, Texas, helping women who, like her, regret their abortion.

Devised by psychologist Theresa Burke and present in dozens of countries, “Rachel’s Vineyard” draws on biblical scripture and is described as a way to promote “healing the pain of abortion.”

“The fact of the matter is that abortion affects you,”

“It makes you angry. At first you just want to get rid of the problem, so you don’t think beyond the problem. You want a solution.

Villanueva discovered Rachel’s Vineyard through her church, and her anti-abortion position — like that of many Americans who disagree with the practice — is heavily colored by her religion.

“A lot of those ladies say: ‘It’s my body, my choice’. It’s not your body; your body belongs to Christ.”

The religious right has long aimed to have the landmark 1973 Roe vs. Wade ruling enshrining the right to abortion in the United States overturned.

On Friday, their prayers were answered when a 6-3 majority on the Supreme Court threw out almost 50 years of settled law, allowing individual states to make their own rules — including banning abortion in all circumstances.

ALSO READ: Abortion pills to become next battleground in US reproductive fight

Texas has been among those states leading the charge to restrict access to abortions.

A law that came into effect last year bans the procedure when fetal heart activity can be detected — usually around six weeks, a time few women are even aware they are pregnant.

El Paso no longer has any clinics offering abortions, but it stands on the front lines of an expanding fight.

Just across the border in New Mexico is the small town of Santa Teresa, the destination for women from all over Texas who want to have a safe, legal abortion in a state that has far more liberal rules.

Even so, elements of the Texas law mean that anyone who helps a woman to get an abortion — even the Uber driver who takes her part of the way to the clinic — can be held liable.

Mark Cavaliere, director of the Southwest Coalition for Life, which designs anti-abortion programs and campaigns, defends such tools.

“Those who perform the procedures are the ones who commit acts of violence against women and children,” he says.

According to figures from the Guttmacher Institute, a research group that compiles statistics and advocates for abortion rights, 75 percent of women who had an abortion in the United States in 2014 were living below the poverty line or classed as low income.

Cavaliere, a father of five, believes that the Supreme Court’s codification of abortion in 1973 undermined women.

“Roe vs. Wade put an expectation on women to feel like they have to alter, suppress and destroy the normal healthy functions of their natural body in order to meet definitions of success that are really based on male norms,” he said.

Southwest Coalition for Life hosts programs such as Her Care Connection that, among other initiatives, offers free ultrasounds in a modern mobile clinic.

The vehicle sometimes parks outside the Women’s Reproductive Health Clinic in Santa Teresa in an attempt to convince women seeking an abortion to continue with their pregnancy.

Dozens of people gathered for a fundraiser for the van in El Paso last weekend.

The baby race — in which two tots crawled to see who could cross the line first — was the highlight for many in attendance.

Jazzmin Hernandez, a 32-year-old teacher who has no children herself, smiled as she watched one baby overtake the other on the final straight.

For her — unlike for the majority of Americans, according to polling — there are no grey areas.

“It doesn’t matter how the baby was conceived. Nothing justifies ending a child’s life,” she said.

“I think Texas is setting an example, and hopefully other states will follow suit and abortion will be completely banned.”