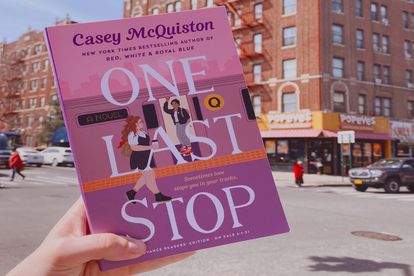 ‘One Last Stop’ by Casey McQuistion. Image via Twitter @casey_mcquiston

‘One Last Stop’ by Casey McQuistion. Image via Twitter @casey_mcquiston

These days, most people get their reading recommendations from the popular social media app TikTok. The influence that #BookTok, the literary section of TikTok, has on young readers’ reading habits is undeniable and the buzz created and circulated on #BookTok about certain authors has led to their books becoming bestsellers.

One such author is American writer Casey Mcquiston. Her contemporary romcom Red, White and Royal Blue instantly gained fame on TikTok and cemented her as a strong, new writing voice.

Her new book, One Last Stop, sees Mcquiston stick to what she knows best – modern romance (with a hint of the paranormal) – and, overall, the book tells a fun, light-hearted and amusing story.

The characters were the saving grace of this story and when the final page came, I wished I didn’t have to say goodbye to them. Not only are they hilarious, but they also seem wonderfully human, with messy pasts and flaws.

The paranormal element in One Last Stop was also very enjoyable and added another layer to the story which worked really well.

Odd pacing trips up YA romcom

However, the pacing of this book was odd. It was very slow in some places and too fast in others, leaving the reader a bit lost. While the Young Adult (YA) genre is no stranger to some intimacy or even love scenes in its stories, One Last Stop, took this too far.

The story was dragged down by way too many love scenes, many of which were unnecessary and added nothing to the story. It seemed to blur the line between representation and became more of a fixation.

That being said, the characters and the overall storyline of One Last Stop make up for the odd pacing and excessive love scenes and makes this book an overall enjoyable and light-hearted read.

For cynical twenty-three-year-old August, moving to New York City is supposed to prove her right: that things like magic and cinematic love stories don’t exist, and the only smart way to go through life is alone.

She can’t imagine how waiting tables at a 24-hour pancake diner and moving in with too many weird roommates could possibly change that. And there’s certainly no chance of her subway commute being anything more than a daily trudge through boredom and electrical failures.

But then, she meets someone…Jane

Dazzling, charming, mysterious, impossible Jane. Jane with her rough edges and swoopy hair and soft smile, showing up in a leather jacket to save August’s day when she needed it most.

August’s subway crush becomes the best part of her day, but pretty soon, she discovers there’s one big problem: Jane doesn’t just look like an old school punk rocker. She’s literally displaced in time from the 1970s, and August is going to have to use everything she tried to leave in her own past to help her. Maybe it’s time to start believing in some things, after all.

Casey McQuiston’s One Last Stop is a magical, sexy, big-hearted romance where the impossible becomes possible as August does everything in her power to save the girl lost in time.

Casey McQuiston is a New York Times bestselling author of romantic comedies and a pie enthusiast.

She writes stories about smart people with bad manners falling in love. Born and raised in southern Louisiana, she now lives in New York City with her poodle mix/personal assistant, Pepper.

One Last Stop is published by St. Martin’s Publishing Group and is available at Exclusive Book stores for R287.