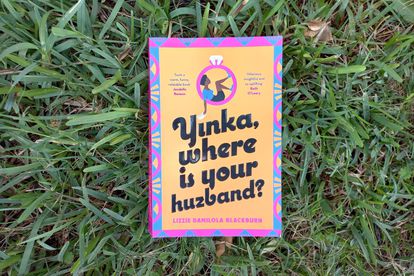 Lizzie Damilola Blackburn’s debut novel, ‘Yinka, Where is Your Huzband?’ i a tale of families, friendship and self-acceptance. Image: Jenna Solomon

Lizzie Damilola Blackburn’s debut novel, ‘Yinka, Where is Your Huzband?’ i a tale of families, friendship and self-acceptance. Image: Jenna Solomon

Lizzie Damilola Blackburn’s debut novel, Yinka, Where is Your Huzband?, tells the story of a British Nigerian woman searching for love in today’s relationship-obsessed society.  In addition, it delves into the mental health “fallout” caused by trying to live up to others’ expectations.

The prose is easy to read and the use of social media graphics, such as emojis and “screenshots” of Google searches, adds a fun, contemporary element.

‘Yinka, Where is Your Huzband?’: Synopsis

Yinka’s a thirty-something woman of Nigerian descent who straddles two worlds in South London. On the one hand, she’s a successful operations manager with a degree from Oxford, a mortgage and a Mercedes-Benz.

On the other hand, she’s part of a large extended family who believe it’s now time that she settles down and finds a husband.

When her cousin announces her engagement, Yinka is determined to find a date for the wedding so that everyone will just stop feeling sorry for her. Unfortunately, Yinka’s poor sense of self leads her into relationships that leave her less confident and more convinced that there is something wrong with her.

The story follows Yinka’s relationships with five men as she attempts to find The One. Throughout it all, she’s beset by friendship and family drama and a major career setback. Because neither of the worlds she inhabited was actually ideal for her.

Will she find the courage to build the life she actually wants? Or will she sacrifice her happiness to her own insecurities and the expectations of those around her?

Issues addressed in ‘Yinka, Where is Your Huzband?’

There are several very relatable issues raised in Yinka, Where is Your Huzband?.

The book addresses colourist ideas of beauty, the difficulty of being single and the importance of self-love. Yinka is also still mourning the death of her father. It’s a portrayal of black women that, though set in London, can affirm the experiences of middle-class women of colour in South Africa.

Another interesting element of Yinka’s story is her Christianity and its influence on her romantic outlook. She’s a firm believer and a regular churchgoer who doesn’t want to have sex before marriage. It’s a theme which is seldom addressed in popular contemporary literature.

But that’s not to say this is a book only for a certain demographic. It’s for anyone struggling to live up to others’ expectations of themselves. It’s for anyone who needs to hear about the importance of self-love.

ALSO READ: Beth O’Leary’s ‘The No-Show’ a romantic comedy with dash of mystery

Lizzie Damilola Blackburn has been asked “Where is Your Huzband?” many times. The story  Yinka started off as a short blog post, evolving into a novel. One of her early drafts won the 2019 Literary Consultancy Pen Factor Writing Competition.

Damilola Blackburn lives in Milton Keyes in the United Kingdom…with her husband!

Yinka, Where is Your Huzband? is published by Viking Books, an imprint of Penguin Books. It retails for R328 at Exclusive Books.