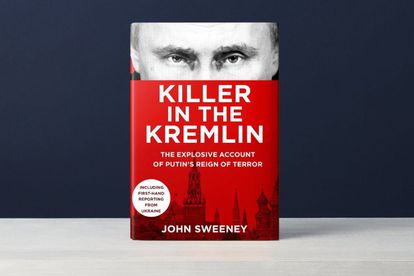 From journalist John Sweeney comes the controversial biography of Vladimir Putin ‘Killer in the Kremlin’. Image via Twitter @PenguinBooksSA.

From journalist John Sweeney comes the controversial biography of Vladimir Putin ‘Killer in the Kremlin’. Image via Twitter @PenguinBooksSA.

Award-winning journalist John Sweeney has taken on Russian President Vladimir Putin in his new book, Killer in the Kremlin: The Explosive Account of Putin’s Reign of Terror. Leaving no stone unturned, Sweeney exposes the dark underbelly of Russian politics and the mysterious man at the helm.

With eye-witness accounts and his own experience reporting from the war zones in Ukraine, Sweeney discusses Russian organised crime coupled with the reality of the effects of the war on the Ukrainian people. Despite becoming an instant bestseller, Killer in the Kremlin has been met with some backlash following its recent release.

Sweeney has never been one to shy away from speaking his mind and controversy is nothing new to him.

From the British government’s involvement in Iraq to the state of North Korea and now Russia, he has reported on and published revealing literature on some of the world’s most dangerous and closely guarded secrets.

Sweeney is no stranger to controversy. Buzzfeed News reports that he left the BBC after 17 years as a veteran journalist after a complaint was filed against him. He has described himself as a “reluctant whistleblower” following his departure from the BBC.

He has also taken on political giants like Donald Trump in a now viral tell-all report and he has confronted Vladimir Putin in person on one occasion. Sweeney has been an outspoken critic of Putin for decades and Killer in the Kremlin is a culmination of this.

The book has, however, been met with some severe criticism.

Most notably, Seamus Martin from The Irish Times has described the book as “infuriatingly selective with the truth”. Martin also states that Sweeney departs from objective journalism as Sweeney “elevates [himself] to the position of the book’s leading character”.

He goes on to describe the book as a “polemic that does not always hit its target”.

But, if we put the criticism around the book aside, is Killer in the Kremlin any good?

‘KILLER IN THE KREMLIN’: NEW INSIGHT INTO WORLD OF RUSSIAN POLITICS

Killer in the Kremlin is a detailed but easy-to-understand take on the very complicated world of Russian politics. This book is surprisingly funny at times and an all-round enlightening read.

The audience of Killer in the Kremlin is anyone who wants to learn more about the mysterious world of Russian politics, crime and the war in Ukraine. The language is simple enough to be understood by everyone, but the content is meaty enough for even experts to learn something. It is not an easy book to get through.

The content is bloody, violent and heavy. But the writing style and occasional humour lighten the tone.

As far as the validity of Sweeney and his claims in the book, he has been credited as an award-winning journalist who has years of experience in the field. There are sources listed at the back of the book but no footnotes which make some of the sources or claims difficult to follow up.

Readers should remember though, that this is a somewhat subjective work. It is not a history book and so citing every source is not pivotal.

According to his website, John Sweeney is an investigative journalist, fiction writer, and broadcaster. Sweeney’s philosophy is: “I poke crocodiles, if crocodiles they be, in the eye with a stick”.

He has reported from all over the world, including countries such as Zimbabwe, Ukraine, Chechnya and North Korea.

Sweeney has written 12 books, which includes his best-selling novel set in the war in Burma, Elephant Moon. He also co-authored the investigation into the assassination of Daphne Caruana Galizia, Murder On The Malta Express. He has received several awards for this work across his decades-long career.

Killer in the Kremlin is published by Bantam Press and is available for purchase at Exclusive Books stores for R358.