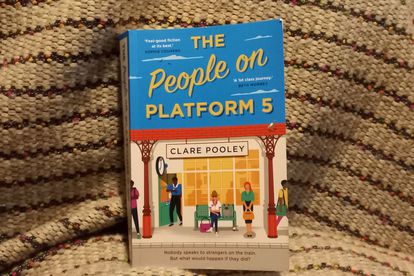 Forget “love conquers all”! According to The People on Platform 5, it’s friendship that actually has that power. In her second novel, Clare Pooley brings a cast of unforgettable characters to the ordinary-yet-extraordinary setting of a train carriage.

Once they’re together, the characters spill the beans on their not-so-perfect lives and band together to get everyone back on track.

‘The People on Platform 5’: Synopsis

Iona, Piers, Martha, Emmie, Sanjay and David all take the same train into central London every day. They never speak to one another — or anyone else on board — because that’s just not the done thing between commuters.

But when Piers chokes on board, the passengers must put their unspoken rules and preconceived assumptions aside. The emergency passes but the incident binds them all together — whether they like it or not.

Everyone on the train knows Iona, the larger-than-life magazine therapist who drinks tea, in a proper tea cup, each morning.

After Piers’ incident, they all feel drawn to confess their troubles to her. Sanjay’s got panic disorder and a case of unrequited love. Piers is embroiled in money problems, while Emmie’s stuck in a career rut. David’s wife is leaving him and Martha is socially isolated after her nude picture was shared around the school.

Iona tries to guide everyone as they work on putting their lives back on track but she’s not as happy-go-lucky as she seems. She’s the oldest person in her office, battling to prove her relevance, while also facing issues in her relationship at home.

As they all confront their failures and their fears, they must rely increasingly on their new train friends. But can their newfound friendship solve even the most heartbreaking of problems?

ALSO READ: ‘Trespasses’: A thrilling account of forbidden love in the time of the Troubles

Why should you read ‘The People on Platform 5’?

The People on Platform 5 is a friendship-affirming novel about the power of relationships and how important it is to avoid preconceived assumptions about people.

“Generally, our closest friends tend to be around the same age as us and share similar views and life experiences, which means that the help and advice they give you in tough times is probably advice you’d give yourself,” author Clare Pooley said in an interview with The Nerd Daily.

“I’m fascinated by friendships that transcend age, background, and experience because I feel that they can add a whole new dimension to that relationship. That’s what I tried to demonstrate with this story.”

Diversity is indeed one of the great qualities of this novel. From a same-sex couple to an Asian main character, a variety of lived experiences are represented, thanks to the use of multiple points of view. The characters find strength in their differences, and help each other to see their shortcomings.

A major theme in The People on Platform 5 is ageism in the workplace.

This is primarily addressed from Iona’s perspective but also from Piers’. This is perhaps an underrepresented topic in contemporary literature, yet so relevant in the context of disruptive technology and millennial workers.

The characters are all in some situation of stress but some of them are struggling with mental illness. There’s a trigger warning for descriptions of panic disorder and a couple of homophobic scenes. You can also expect a hefty dose of sexism and sexual harassment.

Clare Pooley is best known as the bestselling author of The Authenticity Project which was published in 2020. She’s also written a memoir, The Sober Diaries, which covers her struggle with alcoholism.

Prior to writing and looking after children full-time, Pooley worked in advertising. She lives in London with her spouse, three children and two dogs.

The People on Platform 5 is published by Bantam Press, an imprint of Transworld Publishers,  and retails for R328 at Exclusive Books.