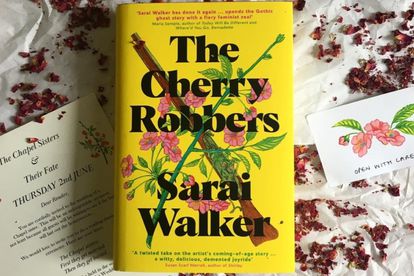 ‘The Cherry Robbers’ is the new novel from bestselling author Sarai Walker. Image via Twitter @serpentstail

‘The Cherry Robbers’ is the new novel from bestselling author Sarai Walker. Image via Twitter @serpentstail

Fans of Shirley Jackson’s The Haunting of Hill House and readers who love dark twists on classic folktales, will adore The Cherry Robbers by Sarai Walker. Filled with incredible writing, deliciously dark and gothic themes and strong female characters, this new novel is not one to miss.

On her website, Walker states that The Cherry Robbers “[builds] off the gothic tradition of Shirley Jackson [and is a] riveting, deliciously twisted feminist tale, a gorgeous and provocative page-turner about the legacy of male power and the cost of female freedom”.

Talking to Molly Odintz from CrimeReads, Walker states: “I definitely wanted to disrupt the idea of ‘happily ever after…”.

And Walker has indeed turned convention on its head with this fiery feminist take on folk tales!

The Cherry Robbers is a rich novel with writing that hooks you from the first page. The history in the story is dense and complex but it never bores the readers. In fact, because the story is so thrilling, you cannot help but race through it.

The writing is where Walker truly shines. Without good writing, you cannot have compelling characters or an exciting story. Walker’s writing is beautifully poetic and deeply touching without being overly flowery.

The characters are all so uniquely written that you feel you know them. They go far beyond the story and they stay with you long after you turn the last page. The characters and their emotions are beautifully painted onto the page by Walker in her dark style. Overall, The Cherry Robbers is a triumph of a novel and will resonate with all sorts of readers.

It’s 2017 and Sylvia Wren is one of the most important American artists of the past century. Known as a recluse, she avoids all public appearances. There’s a reason: she’s living under an assumed identity, because she outran a tragic past. But when a hungry journalist starts chasing her story, she’s confronted with the person she once was: Iris Chapel.

Back in Connecticut, in 1950, Iris Chapel is the second youngest of six sisters, all heiresses to a firearms fortune. They’ve grown up cloistered in a palatial Victorian house, mostly neglected by their distant father and troubled mother, who believes that their house is haunted by the victims of Chapel weapons.

The girls long to escape, and for most of them, the only way out is marriage. But not long after the first Chapel sister walks down the aisle, she dies of mysterious causes, a tragedy that repeats with the second, leaving the rest to navigate the wreckage, to heart-wrenching consequences.

Ultimately, Iris flees the devastation of her family, and so begins the story of Sylvia Wren. But can she outrun the family curse forever?

Sarai Walker is the author of two novels, The Cherry Robbers and Dietland. According to Sarai Walker’s website, Dietland has been published in more than a dozen countries. It was also adapted into a television series for AMC.

Walker has been published in The New York Times, The Washington Post, The Guardian, to name a few. She also holds a MFA in creative writing from Bennington College and a PhD in English from the University of London.

The Cherry Robbers is published by Serpent’s Tail Books and is available for purchase at Exclusive Books stores for R333.