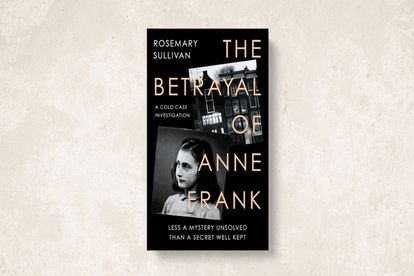 The tragic true story of Anne Frank and her widely known and beloved diary is hardly escapable, even today, almost 80 years later. Her vivid diary, which she kept while she was in hiding in Amsterdam during World War 2, has inspired millions of readers around the world.

Anne and her family are remembered for their bravery and they are a shining example of the tragedy of the Holocaust, but their story also has stayed with us because it is shrouded in mystery.

The Frank family (and others) successfully hid in a secret Annex for over two years, but on 4 August 1944, someone betrayed them. Tragically, Anne and her family were discovered and would later be sent to concentration camps.

The mystery of who betrayed Anne and her family has been the subject of numerous investigations over the years and there are many theories around who the betrayer was.

In her recently published book, The Betrayal of Anne Frank: A Cold Case Investigation, author Rosemary Sullivan tells the story of the cold case team who claims to have solved this mystery once and for all.

Vince Pankoke is a former FBI agent who put together a team of scientists, detectives and historians to tackle the case of Anne Frank and her family. They claim to have found the person who told the Nazis where the Frank family and others were hiding.

The betrayer, they say, is Jewish notary Arnold van den Bergh. It is believed he probably gave up information about the Franks to save his own family.

The Betrayal of Anne Frank: A Cold Case Investigation takes the reader through the team’s six-year intense investigation into this mystery.

FOR MORE BOOK NEWS AND REVIEWS, CHECK OUT OUR BOOK PAGE

‘THE BETRAYAL OF ANNE FRANK‘ MET WITH HARSH CRITICISM

Even though this book tells the story of an investigation which hoped to lay this mystery to rest, it has done the opposite. Since its publication in January, it has been the subject of intense debate and scrutiny.

A group of Dutch historians published an in-depth report on the book, declaring the investigation’s findings “a shaky house of cards”.

In the Netherlands, Jewish organisations have asked that The Betrayal of Anne Frank be removed from shelves. The Dutch publisher of the book, Ambo Anthos, has also halted all printing of the initial bestseller. They have also apologised for “not adopting a more critical stance”.

Furthermore, John Goldsmith, the president of the Swiss-based Anne Frank Fonds foundation declared the book’s findings to be bordering on a conspiracy theory.

There is no smoking gun or hard evidence. The findings are…mainly based on one note, written after the war.

Ever since the backlash against the book started, Pankoke and his team have stood their ground. Sullivan has also defended her work in a public statement. She has stated that she has “full confidence” in the book, as well as the investigation.

Investigation leader Vince Pankoke also released a statement in which he insists that their theory was the most probable one. He said he was disparaged at the critics’ remarks on the investigation.

The Betrayal of Anne Frank: A Cold Case Investigation is published by William Collins. It is available for purchase at Exclusive Books for R388.