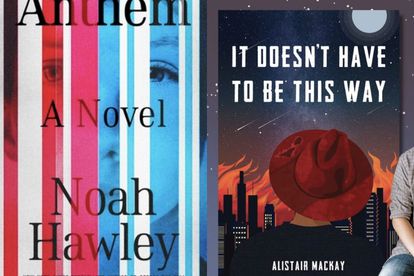 Could it be a mental health epidemic, leading to a spate of mass suicides, while right-wing extremists attempt to ferment a new American civil war, as in Noah Hawley’s ‘Anthem’ ? Or is it the nightmarish process of capitalism failing to stop the climate crisis it has unleashed on humanity, as in Alistair Mackay’s ‘It Doesn’t Have To Be This Way’? Image via Twitter @NBPublishers/@BaronDestructo

Could it be a mental health epidemic, leading to a spate of mass suicides, while right-wing extremists attempt to ferment a new American civil war, as in Noah Hawley’s ‘Anthem’ ? Or is it the nightmarish process of capitalism failing to stop the climate crisis it has unleashed on humanity, as in Alistair Mackay’s ‘It Doesn’t Have To Be This Way’? Image via Twitter @NBPublishers/@BaronDestructo

As income inequality reaches historic new heights, some media promote the colonisation of Mars by a narcissist oligarch from Pretoria as a viable solution to environmental collapse.

The social reality of 2022 feels chaotic and increasingly unstable, which begs the chilling question: What comes next?

THE NOVELS USE FICTIONAL NARRATIVES FOR POLITICAL ARGUMENTS

Could it be a mental health epidemic, leading to a spate of mass suicides, while right-wing extremists attempt to ferment a new American civil war, as in Noah Hawley’s Anthem?

Or is it the nightmarish process of capitalism failing to stop the climate crisis it has unleashed on humanity, as in Alistair Mackay’s It Doesn’t Have To Be This Way?

A setting where the inhabitants of a near-future Cape Town watch as today’s world burns from uncontrollable fires, drowns with rising sea levels and starves as food systems wither under extreme weather and uncontrollable temperatures?

Anthem is the sixth book by an American author who is best known for his innovative writing on television shows such as crime drama Fargo and the surreal Legion, while It Doesn’t Have To Be This Way is South African Mackay’s debut novel.

Despite their geographical differences, both authors use fictional narratives to explore a sobering political argument.

They conclude that not only is the dominant capitalist order the cause of the spiralling crisis but it is also incapable of surviving the coming environmental and social dislocations of the 21st century.

By focusing on how characters attempt to survive and retain a sense of human dignity against a hopeless future, the authors contribute to a literary tradition of using the future to critically consider the direction of contemporary society.

Throughout the last century, science-fiction has warned of the consequences of power and domination, such as the nightmarish spectre of nuclear war, environmental depletion and the struggle to retain individuality in a mechanised world.

What is especially disturbing is how much of the fearful reality of today seems to have sprung off the pages of the darkest imaginings of prior generations.

Octavia Butler’s Parable Of the Sower (1993) and Parable Of the Talents (1998) focus on Lauren Olamina, a young Black woman in a 2020s America that has been wrecked by environmental disaster, greed and runaway inequality.

The second book features the emergence of a far-right president who, as with Donald Trump’s campaign in 2016, uses the slogan “Make America Great Again”

His fanatical followers terrorise women (such as with public “witch” burnings) and minorities, but the books also show how dispossessed people fight back against rising neo-fascism.

The reason that Butler’s work seems to have an uncanny resonance with our present reality is that, as a writer sensitive to questions of power and resistance, she was able to read the direction that the politics of her time were leading.

The 1990s were a time of rampant neoliberalism and the belief that humans had entered the “end of history” and the age of free markets and wealth accumulation.

In contrast, Butler saw that this was producing greed and cruelty.

Her fiction honestly depicted how unrestrained capitalism was not leading to more freedom and stability, but to organised sadism, reality-show politicians and immigrant children being detained in cages.

But rather than viewing apocalyptic works of fiction as dreadful warning, today’s Right often welcomes social collapse in the belief that it will purge the world of their enemies and allow them to live as rulers of the wasteland.

The rise of internet self-publishing has unleashed a flood of “survivalist” fiction, which focuses on how to stockpile fuel, food and – most importantly – weapons against such monstrous foes as “child-eating leftists”.

Even more on the fringe is the truly despicable novel Iron Gates, which openly fantasises about being a death camp commander after a nuclear war.

The book is used for recruiting by a neo-Nazi doomsday cult called Atomwaffen Division, whose members in the United States and Europe have been implicated in murders and attempts to attack nucleur power plants.

Shockingly, despite the clear dangers posed by this group, court documents in 2021 revealed that the FBI had been paying the fascist publisher of Iron Gates to be an informant on other extremists.

In Anthem, a group of teenagers escapes from an anxiety clinic, after a rash of mass suicides by people terrified of the climate crisis, and travel through a US full of mass shooters dressed as clowns, religious fanatics and Jeffrey Epstein-style predators.

Hawley clearly intends the book as a state of the nation statement on post-Trump politics, but his ambition is let down by thin characterisation and dialogue that often feels more like an opinion column than compelling speech.

Throughout the novel, he interrupts the plot to insert commentary where he writes of his fear that fiction is incapable of capturing reality, which has the grating impact of killing the narrative momentum he has built.

Rather than creating a plausible immersion in the world of tomorrow, Anthem too often feels like a disjointed, hectoring, 400-page lecture.

While his passion and anger at the state of the world is laudable, it fails as a novel, which is especially disappointing when compared to the powerful tragicomedy of his work on Fargo.

His book focuses on the intertwined lives of three characters – Malcolm, Viwe and Luthando – and explores themes of class, race and sexuality against the backdrop of a rapidly worsening environment.

By retaining a sharp focus on individuals, he injects a compelling psychological realism, which gives the work a terrifying plausibility as the protagonists watch today’s world of consumer capitalism and binge-watching being decimated by economic and environmental failure, leading to a brutal, depleted future of sinister cults, desperate attempts to escape with virtual reality technology and generalised misery.

The result is a deeply disturbing work. Reading it against the backdrop of the floods in KwaZulu-Natal and endless, purgatorial power cuts, I often had to put my copy down, because its bleakness seemed too close for comfort.

But then again, the point of such work is to force us to look reality in the face and realise how precarious our society really is – and how the greed, moral depravity and myopia of political and corporate elites is what causes it.

This is not the collective fault of all humanity or some kind of divine punishment, but the direct result of an ecocidal system that values the constant pursuit of profit over life.

The fact that both novels feel less like speculation and more like social realism is a warning. This is not the world we want, but it is the world we live in.