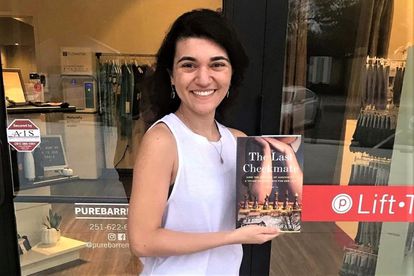 Gabriella Saab with her debut novel, ‘The Last Checkmate’. Image via Twitter @GabriellaSaab.

Gabriella Saab with her debut novel, ‘The Last Checkmate’. Image via Twitter @GabriellaSaab.

With her stellar debut novel, The Last Checkmate, Gabriella Saab has truly cemented herself within the world of historical fiction writing.

Described as “The Queen’s Gambit meets The Tattooist of Auschwitz“, Saab’s first novel tells the story of Maria, a young Polish resistance worker imprisoned in Auschwitz as a political prisoner…who has to play chess in exchange for her life.

Following the successful release of her debut novel, Saab sat down with The South African for an exclusive interview where she talked about her experience writing and publishing a book during lockdown.

She also elaborates on her own journey to Auschwitz, her future writing plans, and provides readers with some of her own book recommendations.

Gabriella Saab on publishing her first book in lockdown

Not only was Saab releasing her first book ever, but she was also doing so during a global pandemic.

When asked about this experience, Saab said: “Publishing is hard. Publishing during a pandemic is REALLY hard. Supply chain issues definitely impacted me, but I think what made it the most difficult was how much of the human relationships were lost or significantly reduced”.

Saab stated that for her, connecting with readers is one of the most special parts of being an author, and she missed that this time around.

Not only did she do extensive reading as she prepared to write her novel, but Saab actually travelled to the Auschwitz concentration camp in Poland. She stated that visiting it was an essential part of her journey writing The Last Checkmate.

“When such important history exists and has been preserved, how could I not do everything in my power to visit? Doing so made everything I had studied in research so much more real and allowed me to understand my story and characters on a much deeper level. It was also a harsh reminder that all these horrible things I was studying, researching, and writing about did indeed happen.”

Saab describes walking across the grounds of Auschwitz where she knew so many people suffered, as “horrible”. Yet, she also felt awe at the incredible bravery of the men, women, and children who themselves walked there.

Her aim with The Last Checkmate is to remind others of the horror of history and to make sure the world remembers.

When asked about how she approaches the writing process, Saab stated that she is very focussed on her characters and that they are central in her work. “People”, she states, “are the most fascinating part of every good story”.

I want to know everything about my characters–who they are, what they want, what their strengths and weaknesses are, how everything is going to affect them, and I want my readers to connect with them as well.

Gabriella Saab on her characters.

Not only does Saab strive to create characters with strong personalities who come alive on the pages, but she also wants her stories to be told by strong, female voices.

According to her, even though we all know they existed in every era, the voices of women have been silenced over the course of time as their stories are often told through a male lens.

AUTHORS ON AUTHORS: WHAT GABRIELLA SAAB LIKES TO READ

When Saab was asked who are her favourite authors, as well as some of her favourite books, she gushed about her love for reading – and now writing – about historical fiction.

Her favourite authors include Ariel Lawhon and Kate Quinn, and she hails them as “queens of historical fiction”.

SAAB ON HER NEXT BOOK

What does the future hold for this inspiring, new author? According to Saab, she is already busy with her second novel, All The Scars We Bear.

It will be a dual timeline with a dual point-of-view following a young Soviet woman who joins the resistance in World War 2 and uncovers dangerous secrets about her family’s past, linking them back to the 1917 Russian Revolution.

Saab said her second novel will be published soon in the United States from William Morrow, an imprint of HarperCollins.