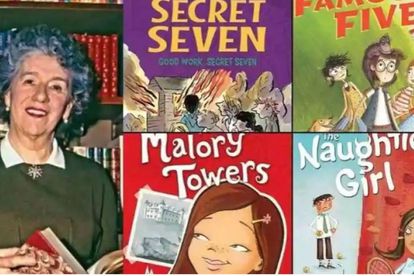 English children’s writer Enid Blyton’s books have been among the world’s best-sellers since the 1930s, selling more than 600 million copies. Image via Twitter

English children’s writer Enid Blyton’s books have been among the world’s best-sellers since the 1930s, selling more than 600 million copies. Image via Twitter

For generations of children, British children’s author Enid Blyton conjured up a cosy world of boarding schools, beaches and freedom from parents.

But The Daily Telegraph reported on Thursday that English Heritage, a charity that maintains historic buildings and commemorates famous residents, had updated its website to say her work has been criticised “for its racism, xenophobia and lack of literary merit”.

This prompted accusations in right-wing media that Blyton had fallen victim to “cancel culture”, where people whose views are deemed unacceptable are ostracised and shamed on social media.

“Five get cancelled!” wrote The Daily Express, referring to her Famous Five series of adventure novels.

The update comes as the Black Lives Matter movement is prompting reexamination of popular culture, including Disney films.

Born in 1897, Blyton is known for her Famous Five and Secret Seven adventure novels, as well books about Noddy, a wooden boy who comes to life.

In a statement sent to AFP, English Heritage said it updated its online entry on Blyton in July 2020 to include “a reference to the fact that the author’s work has been criticised for its racism”.

It said that this was part of moves to “provide a fuller picture of each person’s life, including aspects that people may find troubling”.

The charity put a blue commemorative plaque on Blyton’s former house in Chessington, southwest of London, in 1997.

The English Heritage website cites her story The Little Black Doll from 1966 where the doll’s face is washed “clean” by rain. It also says that publishers Macmillan in 1960 refused to publish her story The Mystery That Never Was, citing a “faint but unattractive touch of old-fashioned xenophobia”.

An academic who has written about Blyton, David Buckingham, emeritus professor of communication and media studies at Loughborough University, told AFP: “I think there are bits of Enid Blyton, like the story… where a doll gets its face bleached, that aren’t what you’d want to be reading to a child.”

“In a way you can say it was symptomatic of her time but it doesn’t completely get her off the hook.”

While Blyton enjoyed massive popularity with children, she was shunned by middle-class parents and the cultural establishment, he stressed.

“When she was in her prime in the 1950s, she was effectively banned by the BBC for being of poor quality, and that continued right through the 60s and 70s.”