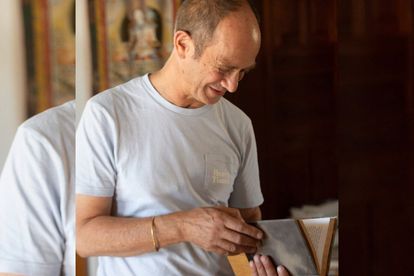 Cape Town-based author and playwright Damon Galgut pages through his Booker Prize-winning book, ‘The Promise’. Galgut will be one of the featured authors at the Franschhoek Literary Festival. would Image: RODGER BOSCH / AFP

Cape Town-based author and playwright Damon Galgut pages through his Booker Prize-winning book, ‘The Promise’. Galgut will be one of the featured authors at the Franschhoek Literary Festival. would Image: RODGER BOSCH / AFP

Each short-listed author for the Booker receives a unique handbound edition of their novel, in a cloth-lined box. He has two others, for novels earlier honoured, but even when he points them out, it takes a moment to spot them on the shelves.

His home is smart, cool and comfortable – and Galgut is at ease in his sock feet and drawstring pants, just right for a longtime yogi.

Although soft-spoken and unpretentious, the 58-year-old South African knows he’s part of a huge moment for African literature. And he’s keenly aware of the rush of publicity that comes with a Booker win.

“It would be a pity to have that opportunity just slip by,” he said.

“If nothing else, it’s an opportunity to frame African writing in a particular way, and hopefully to draw attention to the fact that it matters. It also matters that these books are read, hopefully by other Africans. None of this can be taken for granted.”

The Promise revolves around four funerals in the Swart family — Swart means “black” in Afrikaans — each in a different decade.

The mix of characters includes a grieving husband, a homeless man, a priest and a murderous carjacker. The effect could be chaotic, but the rendering of the figures who initially seem deeply unsympathetic is graceful and surprisingly human.

Early on, the dying matriarch makes her husband promise to give a piece of land to the black woman who took care of her during her illness.

“The family basically gets whittled down towards one last surviving member,” Galgut said.

The novel’s sweeping narrative arc – and the almost uniformly glowing reviews – can make the work seem like a heavy read, or at least a required one. But it’s also darkly funny in its satire.

The daughter who, haltingly, tries to make the family live up to its promise is named Amor (love). Her father owns a snake park popular with school groups but dies of a cobra bite during a bizarre fundraiser.

“They tend to be events like marriages that sort of pull disparate groups of people together, sometimes from quite far afield,” Galgut said.

“It’s the living people pushing against each other, or pulling together, whoever it may be, that provide the comedy. Hopefully, they amount to a tragic comedy, which is sort of how I see the book.”

His Booker win came in a year when Africans scooped the world’s top literary honours, from the Nobel to France’s Prix Goncourt and Portugal’s Camoes Prize.

DAMON GALGUT ON HOW LOCAL ART CAN ‘PASS IN SILENCE’

The welcome international recognition clearly helps sales, reflecting the fact that publishing has flourished across the continent in recent years. Despite this success, Galgut says there has been scant official recognition.

“It’s not passed me by that there hasn’t been one word, not one mini-tweet from the Department of Arts and Culture in response to the book,” he said.

“It’s not passed me by that there hasn’t been one word, not one mini-tweet from the Department of Arts and Culture in response to the book,” he said.

“And I kind of wish I believed that that was a sign that meant they didn’t like the book. But I think the truth is they probably just haven’t noticed. Any sort of sporting achievement (sparks a) hullabaloo to celebrate it. But the arts can apparently just pass in silence,” he said.

ALSO READ: Africa’s emergence: Why the continent is dominating literary prizes in 2021