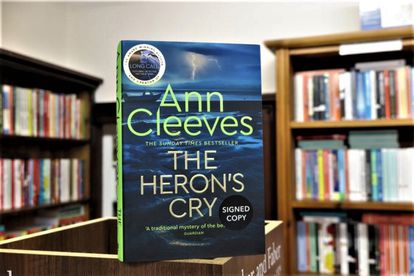 New York Times bestselling and award-winning author returns with the extraordinary follow-up book to The Long Call. The Heron’s Cry is the second instalment in her Two Rivers series following detective Matthew Venn and his team of eccentric colleagues.

The Long Call was adapted into a crime drama television series which premiered in October 2021 and quickly became the biggest series premiere on BritBox.

Fans have been eagerly awaiting a new mystery from Cleeves and the wait is finally over. Her latest book, The Heron’s Cry, has all the beloved elements of a classic, dark mystery novel and is also set to be adapted as a TV series shortly.

‘THE HERON’S CRY’: FOCUS ON INNER WORKINGS OF DETECTIVE WORK

Cleeves is no novice when it comes to mystery writing; with more than 20 novels under her belt, she has mastered the art of crime writing.

The Heron’s Cry is not a fast-paced, on-the-edge-of-your-seat type of book. It is a slow-burner with compelling characters at its centre.

One of my favourite elements of this book is the deep dive into detective work and police procedure. My fellow thriller fans will appreciate this feature and will glean insight into the nitty-gritty of a police investigation and the inner workings of a case as it is solved.

Cleeves has a less-is-more writing style and most developments and discoveries happen through long stretches of dialogue. There are a host of characters to keep track of and complex storylines which will have you making notes just to keep track of everyone and everything.

This is a book more suited to a leisurely night by the fire rather a quick, tense read in one sitting experience. For fans of fast-paced, action-packed thrillers, this one might be a bit too slow for you, but for bookworms who prefer a slow-burner with a gradually developing story, this book is one to put on the Christmas wish list.

North Devon is enjoying a rare hot summer with tourists flocking to its coastline. Detective Matthew Venn is called out to a rural crime scene at the home of a group of artists. What he finds is an elaborately staged murder — Dr Nigel Yeo has been fatally stabbed with a shard of one of his glassblower daughter’s broken vases.

Dr Yeo seems an unlikely murder victim. He’s a good man, a public servant, beloved by his daughter. Matthew is unnerved, though, to find that she is a close friend of Jonathan, his husband.

Then another body is found — killed in a similar way. Matthew soon finds himself treading carefully through the lies that fester at the heart of his community and a case that is dangerously close to home.

MORE ABOUT THE AUTHOR ANN CLEEVES

Ann grew up in North Devon but in 1987, Ann, her husband Tim and their two daughters moved to Northumberland and the north east provides the inspiration for many of her subsequent titles. Ann has worked with libraries her entire career and was even appointed as a National Libraries Day ambassador in 2016.

Ann states that “Libraries matter. If we believe in equality of opportunity we must fight not just for the buildings but for the range of books inside and the skilled staff who can promote reading in all its forms.”

Ann has been presented with many awards for her body of work such as the Diamond Dagger of the Crime Writers’ Association, the highest honour in British crime writing, at the CWA’s Dagger Awards ceremony in London. In 2006, Ann Cleeves was the first winner of the prestigious Duncan Lawrie Dagger Award of the Crime Writers’ Association for Raven Black, the first volume of her Shetland series.

Ann’s books have been translated into twenty languages. She’s a bestseller in Scandinavia and Germany. Her novels sell widely and to critical acclaim in the United States.

The Heron’s Cry is published by Pan Macmillan and is available at Exclusive Books stores for R338.