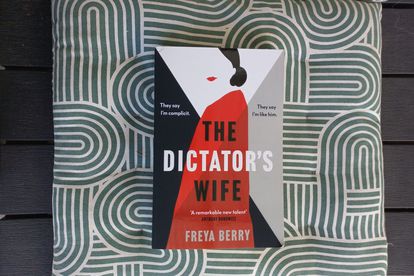 Set in an imaginary, yet very realistic European country, The Dictator’s Wife is an engaging testimony to the power politics exerts over people’s personal lives. The premise — a family secret that the main character Laura is seeking to uncover — is intriguing and will keep you spellbound up to the very end.

The Dictator’s Wife takes place against the backdrop of a trial in post-Cold War Yanussia.

Awaiting trial is none other than Yanussia’s former first lady, Marija, whose late husband ruled the country before he was mobbed to death by revolutionaries. Marija is accused of complicity in her husband’s dubious financial transactions. She pleads her case to a young female lawyer, while also drawing her into a tangled web of lies.

Defending Marija, is Laura whose family fled Yanussia before the revolution. Laura is determined to find out what exactly happened in Yanussia to her parents.

Laura’s parents warn her not to trust Marija, but when she meets the late dictator’s wife, she quickly falls under her spell. Marija still holds far-reaching power and Laura’s investigation into her family’s past depends on keeping Marija’s favour.

Soon, Laura is caught up in the intoxicating web of secrets surrounding Marija, all of which lead her to decide whether to pursue justice or Yanussia’s economic future.

Is ‘The Dictator’s Wife’ for You?

The Dictator’s Wife is a stimulating account of power and the people caught up in it. It’s got elements of a political thriller combined with a personal quest. On both subjects, the novel poses some tough questions to the reader.

For those who like mother-daughter tales or investigating the skeletons in the closet, The Dictator’s Wife is a good choice. When you eventually find out the truth of Laura’s family, you’re bound to weigh up the burden which keeping such a secret has placed on Laura’s relationship with her mother.

If you’re interested in questions of revolution and justice, this is a definite must-read. There’s the question of Marija’s complicity in the dictatorships and whether Laura should expose the extent of her power. While it’s not so much the focus as you may expect, the issue of misogyny is also raised.

Coming from a journalistic background — Having worked for Reuters and written for The Guardian and The Independent —  Freya Berry has brought her investigative skills to The Dictator’s Wife.

While reporting on the 2016 American election, she came up with the idea for this book. It’s based on her interest in how public perception can be so far off from the truth and manipulated by glamour and fear. She spent several months in Eastern Europe researching the story.

Berry splits her time between London and the Welsh seaside. She posts regularly on Twitter.

‘The Dictator’s Wife’ is published by Headline Review. It retails for R363 at Exclusive Books.